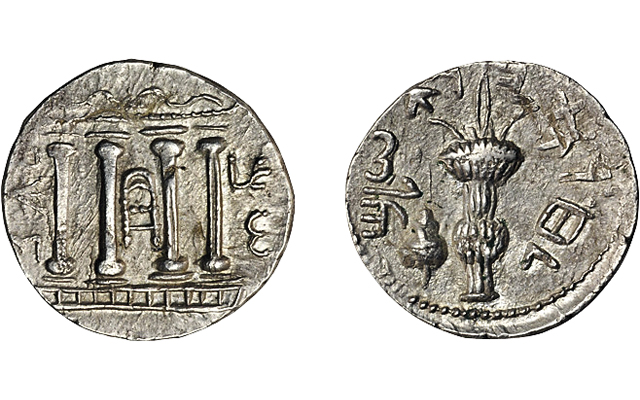 An undated (circa 134 to 135 A.D.) silver tetradrachm of the Bar Kochba Revolt was issued for Jewish soldiers under duress during war with Romans.

A Year 3 (circa 134 to 135 A.D.) silver tetradrachm struck during the Bar Kochba Revolt highlight’s Stack’s Bowers Galleries’ world coin offerings during an auction at the Whitman Coin & Collectibles Baltimore Expo Oct. 30 to Nov. 1.

The coin is a remnant of the Jewish-Roman wars that decimated the Jewish population and destroyed Jerusalem during a nearly seven-decade period bridging the first and second centuries A.D.

The final period of this bloody struggle was known as the Bar Kochba Revolt. Simon Bar Kosiba took the name Bar Kochba, which means “Son of a Star,” and became the commander for the Jewish forces.

As the revolt progressed, coinage was needed for use by the Jews. Silver and bronze Roman coins were overstruck with Jewish images and legends.

The obverse design for this silver tetradrachm shows the façade of the Temple of Jerusalem, and inside the temple is the famed Ark of the Covenant.

The reverse depicts agricultural symbols significant to the Jewish harvest festival, the lulav (frond of the date palm tree) and the etrog (yellow citron). The legend around this design translates to “For the freedom of Jerusalem.”

Overstruck silver tetradrachms are among the most religiously significant coins issued by the ancient Jews.