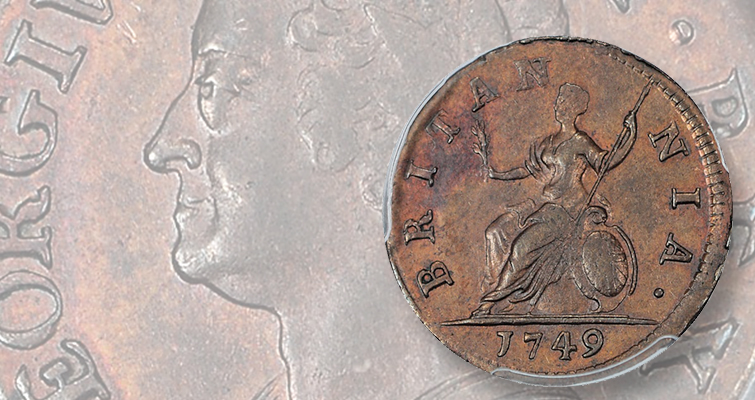 While high grade examples are elusive, circulated 1749 farthings are easy to find, making them an ideal type coin to showcase the farthing denomination in an American collection. 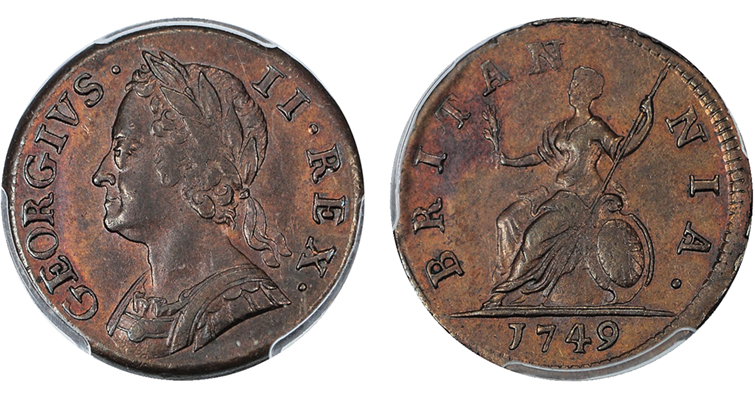 Thomas Jefferson looked at the foreign coins in circulation to help develop his decimal plan of cents, dollars, and eagles for America.

The half cent was a late addition into Thomas Jefferson’s decimal plan of cents, dollars, and eagles. Jefferson supposed that a cent would be of low enough value to suffice most small transactions. Despite his belief, Jefferson left the door open for something smaller, taking a cue from the coins then in circulation. Writing in 1784, Jefferson said “it will probably be the half of the copper I promise, that is to say 5/1000 or .005 of a dollar, this being very nearly the farthing of England.” Just as our dollar was patterned after the Spanish milled dollar or 8-real coin, the mother of the “Little Half Sisters” was the farthing.

Named for their value of four to a penny — thus a “fourthing” — farthings were imported to American shores for centuries but were never struck here. The only entry in the Colonial coin canon for a farthing is the so-called Pitt farthing, a rare smaller-sized version of the circa 1766 Pitt token, sometimes called a Pitt halfpenny though neither size version was seemingly intended to circulate as money.

Despite their absence from A Guide Book of United States Coins, the story of farthings in America is nearly as old as America itself. Tiny Harrington farthings, struck in England about 1613, have been found in Jamestown and at nearby Wolstenholme Towne, the subject of a popular book called Martin’s Hundred by Ivor Noël Hume. Archaeological digs led by Hume found a Harrington farthing in a soil strata dating to before the destruction of the town by natives in 1622, making it one of the earliest known deposits of an English coin in American soil.

Irish farthings of Queen Elizabeth I, dated 1601 and 1602, have also been found at Jamestown, and other 17th century farthing types have been recovered at sites up and down the Eastern seaboard. Archaeology and metal detector finds also show that farthings depicting all three King Georges were commonplace in American circulation.

American ingenuity was some­times put to work when a farth­ing’s change was needed. Half­pence, American state coppers, and similar coppers survive that were cut in half to make change, producing a truly “American” farthing.

In 1750, the ship Mermaid de­livered hundreds of thousands of farthings (and even more half­pence) dated 1749 to Boston for circulation in America. While high grade pieces are elusive, circulated 1749 farthings are easy to find, making them an ideal type coin to showcase the farthing denomination in an American collection.