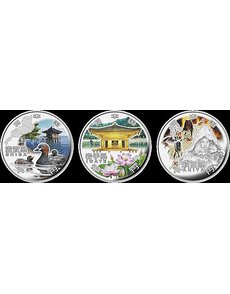 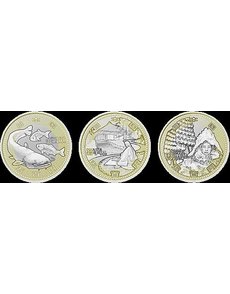 Japan’s program honoring each of the nation’s 47 prefectures continues.

The latest coins celebrate Shiga, Iwate and Akita, and are the 17th, 18th and 19th coins in the program, respectively.

The program, announced in 2008, celebrates each of Japan’s 47 prefectures. Authorized for each prefecture are two companion pieces: a circulating 500-yen coin and a colorized Proof 1-ounce silver version. The program runs through 2016.

Each 500-yen coin (with a face value worth about $6.13 in U.S. funds) is composed of 75 percent copper and 12.5 percent each of zinc and nickel. Each weighs 7.1 grams, measures 26.5 millimeters in diameter and has an estimated mintage of about 1.8 million coins per prefecture.

Shiga is located in the Kansai region of Honshu Island, the largest of Japan’s islands.

The Shiga 500-yen coin shows Biwa catfish and round crucian carp, indigenous species that live in Lake Biwa. The lake is one of the world’s few ancient lakes, with a history dating some 4 million years, making it home to many rare creatures not found anywhere else, according to the Japan Mint.

The lake is the most important water source for people living in the main part of western Japan including Osaka where the Japan Mint is located.

The 1,000-yen coin also celebrates Lake Biwa, showing the prefectural bird, the little grebe, as well as the Ukimido temple where locals pray for the safety while on the lake.

Iwate Prefecture, the second largest prefecture in Japan, faces east toward the Pacific Ocean on the northern end of Honshu Island. The prefecture was devastated by the March 11, 2011, earthquake and tsunami with most ports destroyed and the fishing industry effectively wiped out.

The 500-yen coin depicts the Konjiki-dô (Golden Hall) of the Chûson-ji temple in the Hiraizumi UNESCO World Heritage Site. In the foreground is Gokusui no En, a poetry party held by poets wearing traditional Japanese kimono costumes at Pure Land Garden of Môtsû-ji temple every May.

The Golden Hall also appears on the 1,000-yen coin with lotus flowers from the Pure Land Garden of Môtsû-ji temple in the foreground.

The Konjiki-dô Golden Hall was constructed by Fujiwara no Kiyohira, the founder of the warring Oshu Fujiwara family in the 12th century. The overall site was designated a UNESCO World Heritage in June 2011 and is now regarded as a symbol of restoration of Iwate prefecture.

Akita Prefecture is also at the northern end of Honshu Island, but faces west.

Explorer Shirase Nobu features prominently on both coins celebrating Akita. Nobu led the Japanese Antarctic Expedition in 1910 to 1912, which landed Jan. 16, 1912, on Antarctica and headed to the South Pole together with four team members. Shirase was born in Akita.

The obverse of the 500-yen coin depicts the Kanto festival, a wish for a prosperous harvest.

The Kanto festival is held in Akita City every August, and during it, the performers balance bamboo poles with many lanterns, which are called Kanto, on their foreheads, shoulders and lower backs. In order to pray for good harvest, the shape of the whole Kanto is regarded as that of the ear of rice, and the 46 lanterns are intended to imitate the traditional means of storing bags of rice.

Two distributors will offer the silver 1,000-yen coins to American collectors as they become available; the Iwate and Shiga coins are now available from PandaAmerica for $109 plus $7 shipping, while Euro Collections International prices the coin at $130 plus $10 shipping. The Akita coins are not yet available from distributors. Euro Collections will also offer the 500-yen coins but they are not yet available.