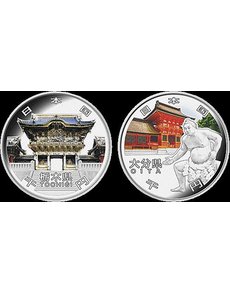 Japan’s series of coins commemorating each of the nation’s 47 prefectures has passed the halfway mark.

The Japan Mint has released two more of the coins, the 23rd and 24th releases in the series. The two new colorized Proof .999 fine silver 1,000-yen coins celebrate the prefectures of Tochigi and Oita. Companion circulating ringed-bimetallic 500-yen coins commemorating the same prefectures are due for release in February.

A brilliantly adorned gate at the Nikko Toshogu Shrine, a Shinto shrine, appears on the obverse of the silver coin for Tochigi.

The shrine, a mausoleum for Tokugawa Ieyasu, the founder of the Tokugawa shogunate, was built in 1617, following his death in 1616. The shrine, along with two others, was added to the UNESCO World Heritage Site list in 1999.

The gate, a popular symbol of the shrine, was added in 1635, and is named for one of the gates of the Heian Palace in Kyoto. The gate is also known as “Higurashi–mon,” meaning “Day–passing Gate,” because visitors could spend all day looking at the colored ornaments and 508 different sculptures.

The Usa-jingu Shrine and sumo-wrestling-great Futabayama feature on the design for the silver coin for Oita Prefecture.

The Usa-jingu shrine in the city of Usa is the first of a series of 40,000 shrines dedicated to Emperor Ojin, who was deified as Hachiman-jin (god of military power). Much of the Usa-jingu shrine was built in the late 19th century and the site was designated as a national treasure of Japan in 1952.

Futabayama, the 35th yokozuna, the highest rank in sumo wrestling, was born in Usa in 1912.

Two distributors will offer the silver 1,000-yen coins to American collectors as they are available.

The Tochigi coin (released in Japan in late October) is now available from PandaAmerica for $109 plus $7 shipping. Euro Collections International will also offer the coin but had not established a price for it by press time.

The Oita coin, released in late November, will be offered after distributors take delivery.