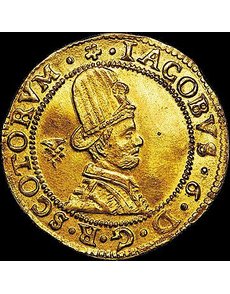 A gold 80-shilling coin of Scotland is a favorite among collectors of Scottish coins because of the short window in which it was issued and the whimsical hat atop the head of King James I. 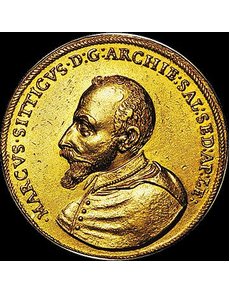 Austrian gold 14-ducat piece from Salzburg, struck in 1612 under Markus Sittikus Graf von Hohenems, is one highlight of the Eric P. Newman Collection auction of Jan. 16 to 18. 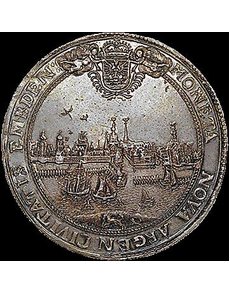 A silver 2-taler piece of Emden in modern-day Germany provides a scene of the port city circa 1674. The piece is a highlight of the Newman auction in January. 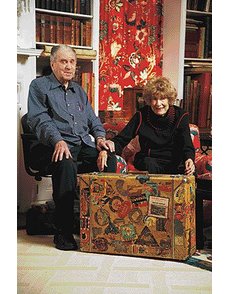 Eric P. and Evelyn Newman have satisfied their wanderlust by traveling to more than 150 countries. The third part of Eric P. Newman’s Collection, offering 3,500 world coins, reflects a numismatic travelogue of sorts.

Consummate coin collector and researcher Eric P. Newman and his wife, Evelyn, call St. Louis home, but, numismatically speaking, the world has been their classroom and playground.

The couple have visited more than 150 countries during 74 years of marriage, often using those trips to acquire items for his coin collection, part of which is now being offered for sale.

A total of 3,500 of Newman’s world coins are being auctioned by Heritage Auctions Jan. 14 to 16 in New York City, in the third auction of his coins since April 2013. The coins in the January auction represent more than 40 countries from Afghanistan to Zanzibar and span 13 centuries of coinage history.

“His enjoyment of travel and adventure is a significant part of his never-ending quest for knowledge of the world and its inhabitants,” according to a press release.

An accompanying photograph shows the couple’s well-traveled luggage covered in destination decals, some matching the countries featured in the auction.

Newman has authored numerous books and articles about the hobby in his 102 years of life.

Proceeds from the auctions are benefitting the Eric P. Newman Numismatic Education Fund. In February an additional 1,600 world coins from his cabinet will be offered online through Heritage.

Newman’s collection contains “thousands more” coins, said Bierrenbach, but Maureen Levine, who is working with Stuart Levine to represent the Newman family, would not provide information about what items might be offered in future auctions.

Newman’s collection covers a wide swath of the globe, and has items dating back to the 600s. The portion offered at auction in January has significant concentrations of European coins, specifically those from Austria and Germany, as well as British, Scottish and Russian coins, from the past 400 years.

One highlight is an Austrian gold 14-ducat piece from Salzburg, struck in 1612 under Markus Sittikus Graf von Hohenems, who was elected archbishop of Salzburg that year.

The extremely rare coin is “unique, or nearly so” and has apparently never been previously depicted in catalogs.

Though a special strike, given the multiple ducat size and its condition, the 1612 14-ducat piece may have seen use in trade, as evidenced by the xiii scratched into the reverse at the start of the legends.

Numismatic Guaranty Corp. has graded and encapsulated the Newman coins, and this one is graded About Uncirculated 58.

Another highlight is the artistic 1674 Emden City View 2-taler coin issued under Leopold I.

The “possibly unique” 2-taler piece is graded Mint State 66 by NGC. It shows a view of the port of the city of Emden, in Lower Saxony in northern Germany.

Many European coins of the 17th and 18th centuries provide a historical record of city skylines and seaport vistas, and this piece “is truly spectacular,” according to Heritage.

Horses gallop in the foreground, with ships seeking safe harbor deeper into the scene. “The addition of soaring birds is likely unique among talers,” according to the firm.

Though single talers with this design are known, they are generally found with circulation wear.

Newman’s offerings of English coins is notable, but a rare Scottish coin is worth highlighting.

The 1592 gold 80-shilling coin is known as the “Hat piece,” because it shows King James I wearing a giant hat.

The type was struck for three years and because of its whimsical design, has become a favorite Scottish coin among collectors.

The coins were issued to replace and redeem a menagerie of older coins in circulation that suffered clipping, damage and more.

One of the more affordable British coins is the gold Angel “touch piece” of James I.

The circa 1604 to 1619 gold coin features a hole at the center top of the obverse, because the piece was used as a talisman or worn as jewelry.

So-called “touch pieces” were often blessed during communion and were thought to ward off or cure disease and were treated as amulets.

NGC has graded the coin as About Uncirculated details, noting that the planchet is cracked from being holed.

Russian coins are receiving interest from buyers around the world, according to Bierrenbach.

One of the most important Russian highlights is the “exceedingly rare” 1729 Peter II ducat, which was issued for only one year during the ever-so-brief reign of the bad luck ruler.

His mother died shortly after he was born and his father was imprisoned when he was 3 years old. Kept in seclusion for a good part of his life, he died in 1730 from smallpox, just three years into his reign.

This example is cataloged by specialists as the “no hair ribbon” variety, which is the rarer of two types that differ only at the hair ribbon.

Parts I and II of the famed numismatist’s collection, auctioned in 2013, together have realized more than $27 million.

The third auction is scheduled for the firm’s Park Avenue offices in New York City. To learn more about the sale, visit www.ha.com or telephone the firm at 800-672-2646. ¦