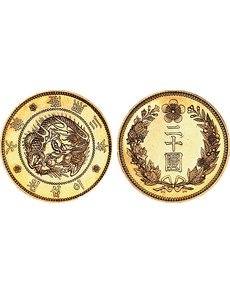 A Year 3 (1909) Korean Yung Hi gold 20-won coin, one of just two examples known and the only one available privately, realized $632,500 during Heritage Auction Galleries’ Sept. 8 auction of the Dr. Norman Jacobs Collection of Japanese and Korean Coins. 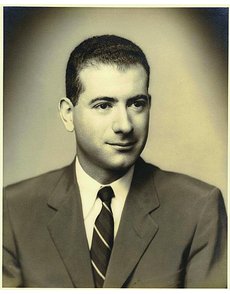 The coin is part of the only set of Year 3 (1909) Korean Yung Hi gold 5-, 10- and 20-won coins available in private hands; the only other known set is held in the Bank of Japan museum.

Numismatic Guaranty Corp. graded all three Korean Yung Hi coins in the auction as Mint State 64, though the lot descriptions suggest they would more correctly be described “as Proof, or Specimen, as [they are] definitely not a normal circulation striking.”

Heritage considers the trio some “of the most important coins in all Korean numismatics.”

This was the first auction appearance for each of the three gold coins, according to Heritage, and the auction represented the largest multi-consignor world coin auction ever presented in the United States, the firm said.

High grade coins – especially those with a grade of MS-65 and above – brought premiums “never before seen in the market, akin to those that are usually associated with high grade U.S. coins,” according to Cristiano Bierrenbach, executive vice president of international numismatics at Heritage. “Just when we thought the world coin market can’t get any better, this auction came along and happily proved us wrong,” he said.

Twenty-two of the top 50 most valuable world coin lots sold by Heritage are from the 366-lot Jacobs Collection, he said.

Jacobs’ interest in Asia was reportedly spurred by a worker at the neighborhood Chinese laundry.

Dr. Norman Jacobs was a young boy in New York City when his collecting took root, his interest fed by seeking and searching change from one vendor to the next. After graduating high school at 15, Jacobs graduated City College at 18 years old, his interest in Asian studies ignited by the aforementioned neighborhood factotum.

After college Jacobs joined the Army, where he applied for Japanese language school and was accepted, narrowly missing being deployed with a unit that never came home.

Upon completing training Jacobs was sent to the Philippines, where he translated intercepted documents and provided the initial translation of the 1945 surrender document.

His collection grew while he served in Tokyo with occupation forces, Jacobs spending hours sorting through all the coins and paper money he could find, his education assisted by a Isao Gunji, curator of the Bank of Japan’s coins and a friend of a friend of a fellow officer.

Jacobs was able, with other numismatic friends, to rescue some of the Osaka Mint coins and patterns that would have otherwise been melted by U.S. forces. He returned to the United States and earned his doctorate in sociology at Harvard University.

While there, Jacobs authored Japanese Coinage and contributed to Friedberg’s opus, Gold Coins of the World, expanding his collection with purchases that included the Meiji Year 3 gold 10-yen pattern from the famous 1954 Palace Collection auction of deposed ruler King Farouk of Egypt.

Jacobs, with Cornelius Vermeule, in 1953 completed the first English language book on Japanese coinage that covered both ancient and modern coinage, and was the first to catalog the coins by date and type.

In 1955 Jacobs moved to Taiwan (where he met his wife) before working in Washington, D.C., and later, for two years in Iran. His Japanese language skills proved useful when the crown prince (now Emperor Akihito) was visiting, as Jacobs was the only government employee in Iran who spoke Japanese.

Jacobs’ interest in numismatics never waned, and he remained active in research and collecting until he died in 2004.

A part of the collection was sold in 2008 by Baldwin’s and Ma Tak Wo, but Heritage appears to have access to the marquee lots. The Baldwin’s/Ma Tak Wo portion of the collection realized $3,371,800 with the 15 percent buyer’s fee.

A total of 365 lots (all but one) from the Jacobs Collection found buyers. The figure for the Jacobs Collection does not include prices for the non-Japanese and non-Korean coins the collection held but that were offered in other Heritage sessions. The cumulative total for all the Heritage ancient and world coin sessions, including an Internet-only portion, topped $20.3 million.