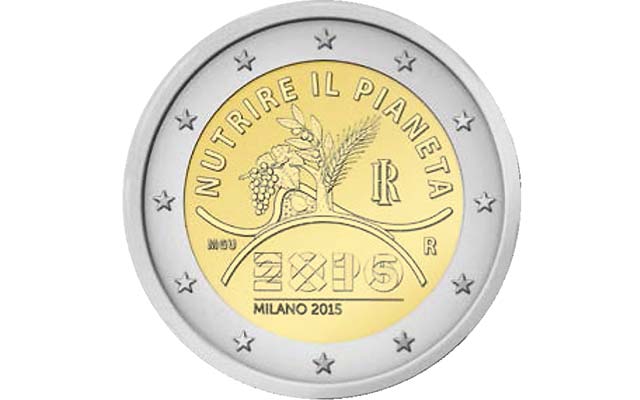 Milan in Italy will host attendees from around the world for Expo Milano 2015.

For six months, from May 1 to Oct. 31 2015, Milan will host the Universal Exposition, an international gathering for nations to share and show the best of their food technologies to promote healthy and safe foods that are available to all mankind as a guarantee of a sustainable and peaceful future.

The obverse of the coin features the Expo logo and a composition symbolizing the fertility of Earth: on a semicircle standing for the terrestrial globe, a seed fed by water and about to germinate; above the earth, a vine shoot, an olive branch and a sheaf of wheat growing out of a tree trunk. Above this is the inscription NUTRIRE IL PIANETA, which translates to “nourishing the planet.

Various inscriptions identify the Italian Republic as the issuer and the Italian Mint as minter, as well as Maria Grazia Urbani as the artist who created the design.

The mintage and release date are to be announced by the Instituto Poligrafico e Zecca Dello Stato, the Italian State Mint.

Want more news about euro coins? We have you covered!