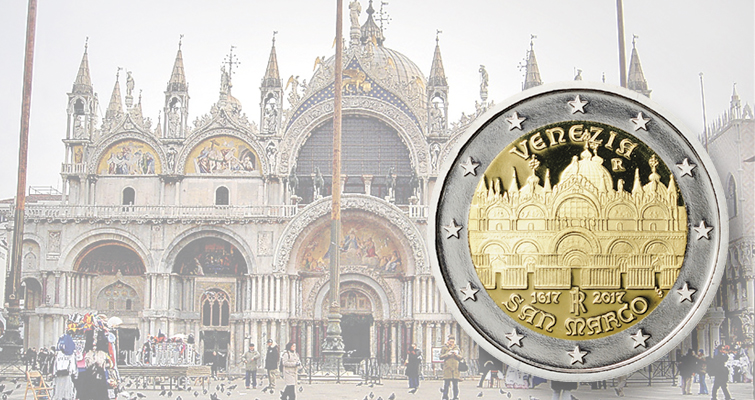 One of the most famous and impressive monuments in Venice is St. Mark’s Basilica.

The Basilica is one of the finest examples of Byzantine architecture and, according to the Italian State Mint, a real symbol of the greatness of the “Serenissima” or the Most Serene, as the Republic of Venice was once known.

Construction of the present Basilica began in 1063 on the same spot where a chapel had been built in the ninth century to house and honor the earthly remains of St. Mark, once they were transferred to Venice from Alexandria.

The coin's obverse depicts the façade of St. Mark’s Basilica in Venice; in exergue, 1617 and 2017, the respective years of completion of the Basilica and of the coin’s issue, flank the monogram of the Italian Republic RI; below, the inscription SAN MARCO; on the right, LDS, the initials of designer Luciana De Simoni; above, VENEZIA and the R Mint mark of the Mint of Rome.