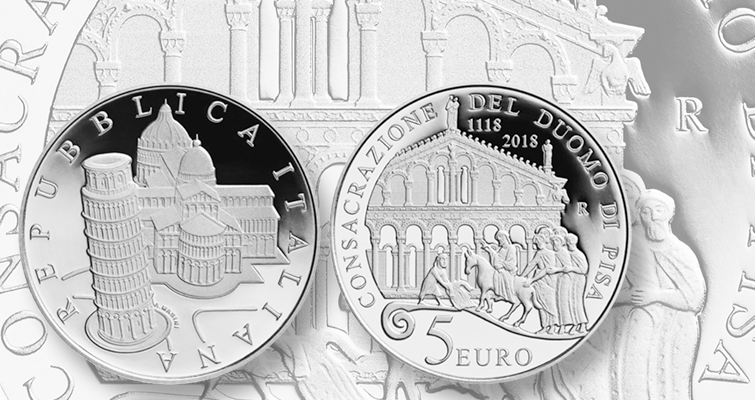 The Proof .925 silver coin for the 900th anniversary of the Pisa Cathedral consecration has a mintage limit of 4,000 pieces.

The Italian State Mint has issued a €5 coin honoring the anniversary of the consecration of the Medieval Cathedral of Santa Maria Assunta. Also known as the Cathedral of Pisa, the stunning house of worship was declared sacred in 1118 by Pope Gelasius II.

The cathedral is located in Pisa, Italy, alongside the Baptistery and the city’s famous Leaning Tower, in the center of the Piazza dei Miracoli, which is also a UNESCO Heritage Site. Architect Buscheto began building the church in 1063 with a combination of classical, Gothic, Lombard-Emilian, Byzantine, and Islamic elements.

The Proof .925 silver €5 coin weighs 18 grams, measures 32 millimeters in diameter, and has a mintage limit of 4,000 pieces. The coin is priced at €43. For more information, visit the Italian State Mint’s website.