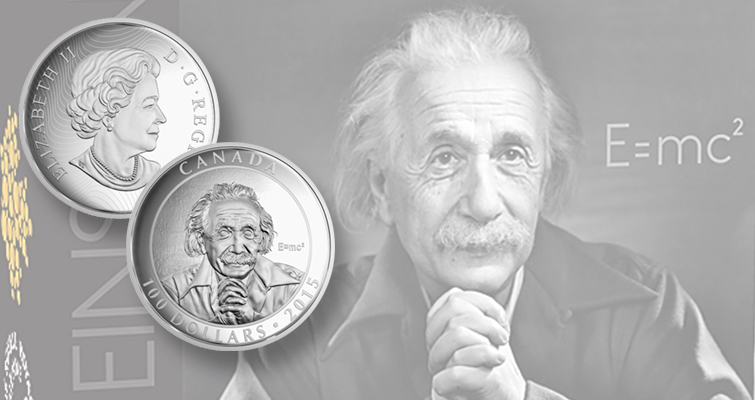 A new 2015 10-ounce silver coin from the Royal Canadian Mint marks both anniversaries by showcasing the scientist’s Canadian connection.

The reverse of the Proof .9999 fine silver $100 coin features an image based on a photograph of Einstein by Canadian photographer Yousuf Karsh (1908 to 2002), who is considered one of the masters of 20th century photography.

RCM engravers reproduced the original portrait taken by Karsh in 1948. Einstein’s breakthrough formula E=mc2 is included within the image.

Karsh took a number of photographs, two of which became iconic images of Einstein worldwide, according to the RCM. One of those two is depicted on this coin.

The coin weighs 311.5 grams, measures 76.25 millimeters in diameter and has a mintage limit of 1,500 pieces. The coin is being distributed through BullionExchanges.com, at an issue price of $675 U.S.