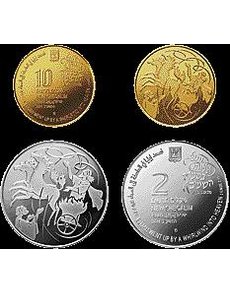 Israel continues its long-running Biblical Art series of coins, in 2011 showing the story of Elijah being caught up in a whirlwind to heaven, seen here on two of the four coins from the release, a Proof .917 fine gold 10-shekel coin, top, and a Proof .925 fine silver 2-new-Israeli-shekel coin, bottom.

All images courtesy of www.israelmint.com.

The biblical story of Elijah ascending to Heaven in a whirlwind, already appearing on canvas, woodcuts, mosaics, and stained glass, is now being told on coins.

The Israel Coin and Medals Corp., or Israel Mint, has issued four coins, two struck in silver and two in gold, sharing the same designs as part of Israel’s long-running “Biblical Art” coin series, which began in 1994.

The story is mentioned in 2 Kings 2:10-11: “… behold, there appeared a chariot of fire, and horses of fire, which parted them both asunder; and Elijah went up by a whirlwind into heaven.”

As the Bible story records, Elijah was weary of his persistent and unsuccessful efforts to correct the ways of the people. He understood that his role as a prophet would soon end, that he would depart this world, and that his disciple Elisha would take over his mission.

Elisha refused to accept that his beloved master was to leave him and the parting between the two, as they walked and talked together, is an integral component of the dramatic scene described in the Bible. As Elisha saw Elijah carried off, he cried: “My father, my father … And he saw him no more and he took hold of his own clothes, and rent them in two pieces. He took up also the mantle of Elijah that fell from him. …” (2 Kings, 2:12-13).

Artist Yaacov Enyedi created a dramatic rendering of the biblical scene, which was then engraved by Tidhar Dagan.

The obverse bears the coin’s face value, “Israel” in English, Hebrew and Arabic, the dates 2011/5722, and a biblical inscription in English and Arabic around the border, and at the upper right, in Hebrew in artistic letters resembling flames within a whirlwind. The state emblem is at top center.

The reverse shows Elijah going up to the heavens in the chariot of fire drawn by horses of fire. Below left is Elisha, appearing shocked at the sight of Elijah’s departure.

Pricing changes daily. Current pricing is available at www.israelmint.com/en or by telephone in the United States at 888-421-1866.