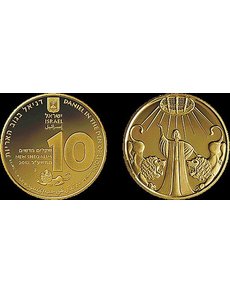 Israel continues its Biblical Art coin series by remembering the tale of Daniel in the Lion’s Den with four new coins, including this Proof .917 fine gold 10-new-Israeli-sheqel coin.

Images courtesy of the Israel Mint.

The biblical tale of Daniel being delivered safely from the lion’s den is the latest subject of the Bank of Israel’s annual Biblical Art coin series.

The account, from chapter six of the Book of Daniel, is one of faith, loyalty and heroism. Few stories in the Bible are used metaphorically today as much as this story.

Daniel grew up in the palace of King Nebuchadnezzar of Babylon and, in biblical stories, earned the favor of rulers by interpreting dreams and translating words being written on the wall by a hidden hand. Jealous rivals convinced King Darius the Mede to decree that petitions and prayers were to be directed to no one but the king for 30 days. When Daniel’s devotion to his God was discovered, the king was bound by the law to place him in a den of lions.

The restless king visited the den at dawn and found Daniel alive, to his relief. King Darius ordered the rivals be sent to the den, where the lions immediately devoured them. Daniel returned to serve as executive officer to Darius the Mede and later, Cyrus, King of Persia.

The reverse of the coin shows a prayerful Daniel, at the base of a sealed lions’ den, flanked but unharmed by two roaring lions.

The obverse carries the denomination; “Israel” in English, Hebrew and Arabic; the date; Israel’s state emblem; and a hungry, roaring lion.

The coin was designed by Aharon Shevo and engraved by Ed Llewellen of the Royal Dutch Mint, where the coins were struck.

Four examples of the coin, two silver and two gold, are being offered.

The prooflike coin weighs 14.4 grams, measures 30 millimeters in diameter and has a mintage limit of 1,800 pieces.

The Proof silver coin weighs 28.8 grams, measures 38.7 millimeters and has a mintage limit of 2,800 pieces.

The gold 10-NIS coin weighs 16.96 grams, measures 30 millimeters in diameter and has a mintage limit of 555 pieces.

The coins are available individually and in multiple sets. Prices may fluctuate, but currently the silver prooflike coin is priced at $96, and the Proof silver coin costs $148; a two-coin set of both silver coins costs $236.