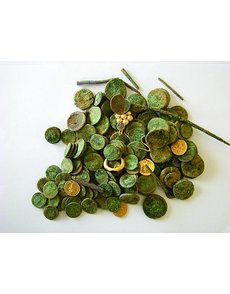 Authorities in Israel have discovered a hoard that likely dates to the time of the Bar Kohkba Revolt, a milestone in Jewish history. Approximately 140 silver and gold coins, as well as a gold earring and ring and silver kohl sticks, were found wrapped in a cloth.

Photograph by Sharon Gal, courtesy of the Israel Antiquities Authority.

The Israeli Antiquities Authority has announced the discovery of a coin hoard likely dating to the time of the Bar Kokhba Revolt.

The hoard, containing approximately 140 gold and silver coins and gold jewelry, was discovered during an archaeological excavation “in the vicinity of the Qiryat Gat Region,” according to the June 5 announcement.

The treasure trove, which includes four gold coins, was probably hidden by a wealthy woman at a time of impending danger during the Bar Kokhba Revolt.

The Bar Kokhba Revolt (A.D. 132 to 135) against the Roman Empire was the third major rebellion by the Jews of Judaea and the last of the Jewish-Roman Wars.

The coins in the discovery date to the reigns of the Roman emperors Nero, Nerva and Trajan, who ruled the Roman Empire from A.D. 54 to 117.

The composition of the find and quality of the coins is consistent with other finds that have been attributed to the time of the Bar Kokhba Revolt, according to Sa’ar Ganor, district archaeologist of Ashkelon and the Western Negev for the IAA.

Archaeologist Emil Aladjem directed the excavation on behalf of the Israel Antiquities Authority. Aladjem discussed details of coins in the find.

“The coins are adorned with the images of the emperors and on their reverse are cultic portrayals of the emperor, symbols of the brotherhood of warriors and mythological gods such as Jupiter seated on a throne or Jupiter grasping a lightning bolt in his hand,” Aladjem said.

The hoard was discovered when rooms of a building dating to the Roman and Byzantine period were exposed during the course of the excavation. Archaeologists discovered where a pit had once been located in the building’s courtyard, and in that pit found, to their surprise, the hoard contents that had been wrapped in a cloth fabric; only several pieces of the fabric remained on the artifacts.

Ganor said the hoard was likely placed there by someone under duress.

“This is probably an emergency cache that was concealed at the time of impending danger by a wealthy woman who wrapped her jewelry and money in a cloth and hid them deep in the ground prior to or during the Bar Kokhba Revolt,” Ganor said.

The hoard also includes an earring crafted by a jeweler in the shape of a flower, a ring with a precious stone on which there is a seal of a winged-goddess, and two sticks of silver that were probably kohl sticks (artifacts used to apply a sort of black eye paint known as kohl).

The treasure trove was removed from the field and transferred for treatment to the laboratories of the Artifacts Treatment Department of the IAA in Jerusalem.

The excavation, undertaken on behalf of the IAA, was funded by Y.S. Gat Ltd., the Economic Development Corporation for the Management of the Qiryat Gat Industrial Park.

As of June 8, the IAA had not responded to Coin World’s inquiries for further details about the hoard contents, the process for dispersing a hoard in Israel and other information. ¦