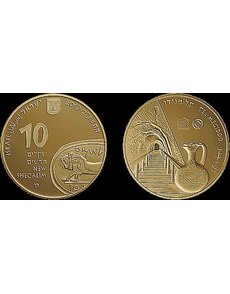 Tel Megiddo, an important archeological site in Israel, is the subject of the fourth and newest release in the Bank of Israel’s UNESCO World Heritage Sites series.

The archeological site is a tel, or mound. Some 20 different cities existed in a period of more than 4,000 years. Excavations have revealed numerous objects, including an eighth century B.C. seal with a roaring lion that appears on the new coins’ obverse.

The reverse shows a tunnel from the city’s water system and a jug, recalling a huge Canaanite treasure trove found at the tel in 2010.