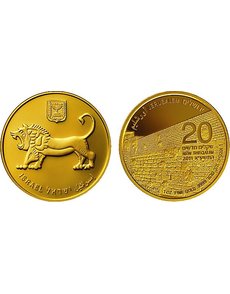 Israel has issued its second annual gold bullion coin, this year celebrating the Western Wall on the reverse design. The Western Wall is an important religious site and hosts millions of visitors annually who seek to pray at the wall.

Images courtesy of the Israel Coin and Medals Corp.

Also known as “kotel,” the wall is the sole remnant of the second temple, which was destroyed by Roman forces in 70 A.D. The walls enclosed and supported the Temple Mount, an iconic religious site.

The 1-ounce .9999 fine gold 20-new-Israeli-shekel coin, which unlike many traditional bullion coins has a mintage limit, was released June 1, Jerusalem Day.

The reverse, and not the obverse as was reported in 2010 when the series began, is the changing side in the annual Jerusalem of Gold series. The Western Wall is the site honored this year in a design by Igal Gabay.

The Western Wall was built as part of a project ordered by King Herod the Great, with huge stones laid down without cement. The wall rises to 32 meters (105 feet), including the lower half that is buried. Two upper layers were added in later periods.

The Western Wall is near where the Holy of Holies of the Temple stood, and as such is considered a sacred place. “The Divine Presence is said never to leave,” according to information from the Israel Coins and Medals Corp.

Also known as “the Wailing Wall” after a style of prayers by Jews at the wall, an estimated 8 million people (including kings and presidents) visit the wall annually to offer supplication or invocation. Visitors come at all hours of the day, often placing a piece of paper bearing their prayer inside the wall’s crevices.

The reverse of the coin shows a portion of the visible wall (much of the wall is hidden behind buildings). The scene depicts people praying at the wall. Native caper plants are shown growing out of the wall in numerous places. Around the upper design border, the word “Jerusalem” appears in Arabic, English and Hebrew. The denomination and date, in Hebrew and English are superimposed over the wall at the right. An inscription featuring the gold fineness and weight in English and Hebrew curves along the rim at the lower right.

The obverse depicts the “Lion of Megiddo,” a design (by Meir Eshel) taken from an ancient 8th century B.C. seal, excavated in Megiddo (Armageddon) in the Jordan Valley.

The seal belonged to Shema, a servant of King Jeroboam II, who was King of Israel during the time of the prophet Amos. The lion is also the symbol of the Tribe of Judah and of Jerusalem. It has appeared on several Israeli coins and paper money issues in the past.

Above the figure of the lion appears the state of Israel emblem and below it the word “Israel” in English, Hebrew and Arabic.

The 1-ounce coin measures 32 millimeters in diameter, weighs 31.1 grams and has a mintage limit of 3,600 pieces.

Because of such a small mintage, the ICMC is not establishing a network of wholesalers as most nations do in selling their bullion coins. However, like other bullion coins, the price of the Jerusalem of Gold coin fluctuates with the daily price of gold rather than being fixed. The price is determined daily by 9 a.m. Israel time, based on the closing U.S. dollars price of 1 ounce of gold in the London market for the previous day. With gold closing at $1,529.25 an ounce on June 10, the price for the coin was listed as $1,890 on June 13 (the next business day), suggesting a premium of 23.5 percent.

Each gold bullion coin will be supplied in a presentation box and accompanied by a certificate of authenticity, with delivery expected up to six weeks from the date the order was approved.