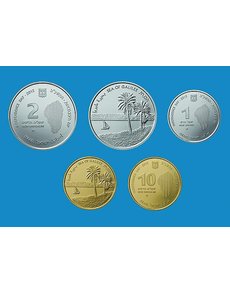 Israel’s annual anniversary coins for 2012, marking the 64th year since the founding of the nation, commemorate the Sea of Galilee.

The Bank of Israel began issuing a coin for the nation’s anniversary of independence in 1958 and has continued the practice without interruption, with coins paying tribute to varying aspects of Israel’s land, life and culture. The 2012 anniversary coin program offers coins in three denominations, two finishes and two compositions.

The views around the Sea of Galilee have brought inspiration to artists for centuries, including the designers of both sides of the 2012 coins.

The obverse by Michal Hamawi bears a harp-shaped outline of the Sea of Galilee. It also features the face value, “Israel” in English, Hebrew and Arabic, the date 2012 and the corresponding Hebrew date 5772, and Israel’s state emblem.

Meir Eshel’s reverse captures the Sea of Galilee as seen from the western shore with its palm trees and wildflowers. In the background is the Golan Heights.

The three 64th anniversary coins share the designs, differing only in their denominational markings.

A Proof .917 fine gold 10-new Israeli-sheqel coin is offered, measuring 30 millimeters in diameter. Mintage of the gold coin is limited to 555 pieces.

Current pricing and more information on all Israeli coin and medal issues are available online at www.israelmint.com and www.holylandmint.co.il. Alternatively, to order by phone in the United States, call the toll free number 888-421-1866. Email the seller at medals@coins.co.il or write Israel Coins and Medals Corp., ICMC/The Holy Land Mint, P.O. Box 2040, Nesher 36680, Israel.

The Sea of Galilee

The Sea of Galilee is located in northeast Israel’s Jordan Rift Valley, between the Golan Heights and the Galilean hills. Positioned at about 700 feet (212 meters) below sea level, the sea is the lowest freshwater lake in the world, and after the saltwater Dead Sea (subject of the 2011 coins) to its south, it is the second lowest sea of any kind.

It receives its waters mostly from the Jordan River, which streams through it from north to south. It is the main source of water and fish for Israel and its waters are pumped into Israel’s National Water Carrier to provide much of the country’s drinking water, and to irrigate the arid areas of the south, making it possible for the desert to bloom. ¦