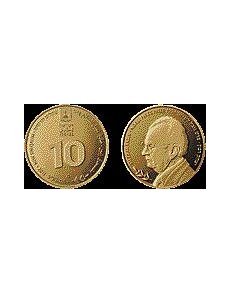 The Bank of Israel continues a series of coins honoring the Nobel Prize winners of the state of Israel, with a 2011 issue honoring former Prime Minister Yitzhak Rabin. The Proof. 917 fine gold 10-New-Israeli-shekel coin seen here is among three versions available.

The series is honoring all of Israel’s Nobel Prize recipients. Israel leads the world on a per-capita basis for the number of Nobel Prize winners, according to the Bank of Israel, which announced the Rabin coins Jan. 10.

The nation’s 10th winner — Professor Dan Shechtman of Haifa Technion (Israel’s Institute of Technology) — received the prize for chemistry in 2011, becoming the sixth winner for Israel in less than a decade.

Born in Jerusalem in 1922 and a graduate with distinction from the Kaduri Agricultural College, Rabin wanted to study Irrigation Engineering. Instead, circumstances led him to embark on what was to become a military career, when in 1940 he joined the Palmach, the elite fighting unit of the Haganah (the Jewish underground army during the British occupation of Palestine).

He spent the first 20 years of Israel’s existence as one of its senior military officers, culminating in his appointment as chief of staff of the Israel Defense Forces from 1963 to 1968. After retiring from the military he served as ambassador to the United States, was elected to the Knesset in 1973 and was first named prime minister the following year.

In 1994, he was awarded the Nobel Peace Prize, together with Shimon Peres (then Israel’s foreign minister), and Yasser Arafat, chairman of the Palestine Liberation Army, for efforts toward peace in the Middle East.

“There is only one radical means of sanctifying human lives. Not armored plating, or tanks, or planes, or concrete fortifications. The one radical solution is peace.”

On Nov. 4, 1995, at the conclusion of a peace rally in Tel Aviv, Rabin was assassinated.

Leaders from all over the world attended his state funeral as he was laid to rest on Mount Herzl in Jerusalem.

The new coin was designed by Aharon Shevo, with a portrait of Rabin engraved by Tidhar Dagan.

The obverse bears the face value, the Israel state emblem, the word “Israel” in English, Hebrew and Arabic, the year of issue (as 2011 and as Hebrew Year 5772 in Hebrew characters), and an olive branch symbolizing peace. Below the face value is the Mint mark, appearing as a Hebrew letter “mem” on the Proof coins and as a Star of David on the silver prooflike coin. Around the right-hand border is “Yitzhak Rabin — Nobel Peace Prize 1994” in Arabic.

The reverse carries the Rabin portrait, based on a photograph taken in the years preceding the Nobel Peace Prize award. Around the border is the inscription “Yitzhak Rabin — Nobel Peace Prize 1994” in English and Hebrew.

Pricing changes daily. Current pricing for the coins is available at www.israelmint.com/en or by telephone in the United States at 888-421-1866.