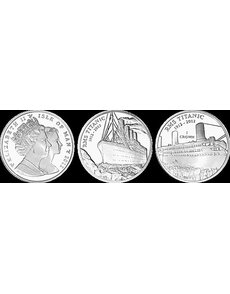 The Isle of Man commemorates the RMS Titanic’s centennial with four noncirculating legal tender coins sporting one of two reverse designs, one depicting the ship as it approached the ominous iceberg in the North Atlantic, middle, and the other a boisterous crowd of passengers embarking in Southampton, right. Each coin features a special jugate portrait obverse, left, showing a young portrait of Queen Elizabeth II in the background paired with a recent image of the queen, who celebrates her Diamond Jubilee in 2012.

The Pobjoy Mint has issued commemorative coins in the name of the Isle of Man commemorating the RMS Titanic’s fateful sinking a century ago.

Two different reverse designs — one a scene showing a throng of passengers boarding the vessel before its ill-fated journey, the other with the ship sailing straight into the iceberg dead ahead — are available in two different metal and finish options, making four different coins.

One hundred years ago, one of the most famous ships in history left Southampton, England, on its first commercial voyage, heading for New York City. Named Titanic because it was the largest passenger vessel in history, the “unsinkable” ship was the epitome of luxury and one of the marvels of the modern world.

But in the early darkness of April 15, 1912, Titanic struck an iceberg in the Atlantic Ocean and was lost, resulting in the deaths of an estimated 1,517 people in one of the deadliest peacetime maritime disasters in history.

Many factors contributed to the enduring interest in Titanic:

The vessel was designed by experienced engineers utilizing the most advanced technologies and safety features of the time; it was a passenger liner, lost on its first voyage with a high number of people killed; the tragedy resulted in lasting changes of laws governing ship and passenger safety; and many decades after the RMS Titanic was lost, the wreck was discovered and revealed to the world.

The obverse of each coin features a jugate portrait showing two images of Queen Elizabeth II: the most prominent is as she appears on current coins, and the other is a portrait of the queen based on how she appeared on the first coins of her reign. The jugate portrait has been produced to celebrate the Diamond Jubilee of her reign.

Each design is issued in two versions: an Uncirculated copper-nickel crown and a Proof .925 fine silver crown.

All of the Isle of Man Titanic coins measure 38.6 millimeters in diameter and weigh 28.28 grams.

The Uncirculated copper-nickel crown has an unlimited mintage and is offered at $15 each or $29 per pair. The silver coins are limited a mintage of 10,000 coins per design.