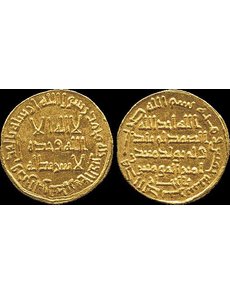 What the auction house calls the most important coin ever struck in the Arabian Peninsula highlights A.H. Baldwin & Sons’ April 25 auction of Islamic rarities. The circa 723 to 724 Umayyad gold dinar has a pre-sale estimate of £1.5 million to £2 million (about $2.4 million to $3.2 million U.S.).

What is “arguably the most important coin ever struck in the Arabian Peninsula,” the earliest gold coin that names a locality in the Kingdom of Saudi Arabia, leads A.H. Baldwin and Sons’ April 25 auction of Islamic rarities.

The A.H. 105 (circa 723 to 724) Umayyad gold dinar was struck in the first year of Hisham Bin ‘Abd al-Malik and the last of al-Alid II Bin Yazid, from gold considered to have been mined from Ma’dan amir al-Mu’minin Bi’l-Hijaz, the Mine of the Commander of the Faithful in the Hijaz. In Uncirculated condition, the coin names Hijaz, the birthplace of the Islamic faith, the land of the holy cities of Mecca and Medina.

It is the highlight from a collection that Baldwin’s is selling in three parts in London in 2012; the first part is for sale April 25 in the Westbury Hotel, Mayfair, with the second part following May 9 and the third part in October.

For more information, telephone the firm at (011) 44 20 7930 9808, email it at auctions@baldwin.co.uk, or visit a special page at its website, www.baldwin.co.uk/islamic-rarities

Umayyad, Mu’awiya b. Abi Sufyan, A.H. 44 (circa 664 to 665) uniface lead seal, legend translating to “among those things ordered by the Commander of the Faithful Mu’awiya to dismiss the Amir ‘Abd Allah bin ‘Amir from the rule of al-Basra,” 21.53 grams, not attached with a cord through a drilled hole but rather by a ring attached at 12 o’clock, 35 millimeters in diameter, “unique,” Lot 5, Extremely Fine.

Arab-Byzantine, Abd al-Malik b. Marwan, undated A.H. 72 to A.H. 74 (circa A.D. 691 to 694) deChristianized copy of a Byzantine gold solidus of the emperor Heraclius and his two sons, 4.4 grams, “earliest gold coin to contain the kalima, the Islamic statement of faith,” Lot 7, Good Very Fine.

Abbasid, al-Mu’tazz, A.H. 252 (866) gold dinar, 4.11 grams, gold for the coin came from the covering of the Makam Ibrahim (the station of Ibrahim), “the stone behind which the Prophet Muhammad prayed when he performed the circumambulation of the Holy Ka’ba,” Mecca, Lot 93, VF.

Ikshidid Dynasty, Abu’l-Misk Kafur, A.H. 357 (circa 967 to 968) gold dinar, Mecca, 2.78 grams, “one of the classic rarities of Islamic gold coinage,” one of five examples known, with two examples available privately “the other remaining with the owner of this piece,” pierced, Lot 103, EF.