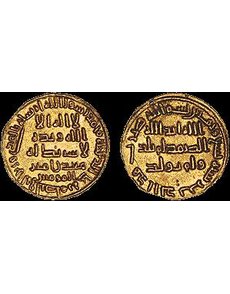 The earliest known gold coin from the “Mine of the Commander of the Faithful,” a key Islamic rarity, highlights Morton & Eden’s April 23 auction in London.

A unique and historically important gold dinar believed to have been produced with gold from the “Mine of the Commander of the Faithful” is expected to sell for up to £1 million in an April 23 sale of Islamic coins at London auctioneers Morton & Eden in London.

The existence of the A.H. 89 (A.D. 708) gold dinar from the Umayyad ruler al-Walid I, according to the firm, was previously reported in the mid-1990s, but the sale catalog is the first time a photograph or full description of it has been published. It has never before been offered at auction and is the earliest known of the Mine of the Commander of the Faithful coins.

The coin is the highlight of the “Important Coins of the Islamic World” auction, a 164-lot offering from Morton & Eden, in association with Sotheby’s.

The site of the Mine of the Commander of the Faithful has been identified as Ma`din Bani Sulaim, which is still worked today; it is located northwest of the holy city of Mecca. Records show that the Caliph al-Walid (A.H. 86 to 96) purchased land in the area containing at least one gold mine, almost exactly when these dinars were made, according to Morton & Eden.

“While there is general agreement on the source of the gold, the question of exactly where these coins were struck is harder to answer. The ‘Mine of the Commander of the Faithful’ dinars may have been struck at a travelling mint which accompanied the Caliph on his journeys,” according to Morton & Eden specialist Stephen Lloyd.

Lloyd said the success of last year’s auction stimulated the appreciation of early Islamic coins with the result that several important examples came to the market, many for the first time.

Arab-Sasanian, anonymous, tentatively identified as ‘Abd Al-Malik B. Marwan, A.H. 75 (circa A.D. 694 to 695) silver dirham, 3.47 grams, “the earliest depiction of the caliph on an Islamic silver coin,” “generally accepted as being another Damascus issue,” Lot 23, “minor deposit on reverse, edge chipped to outermost circle on each side, otherwise About Extremely Fine and of the highest rarity.”

Abbasid, Al-Mutawakkil, Makka, gold A.H. 233 (circa 848 to 849) dinar, “unpublished, believed to be the earliest dinar from the holy city of Makka,” “small area of weakness in margin on each side,” Lot 77, Good Very Fine.