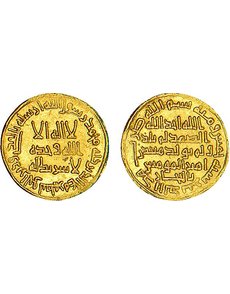 The Umayyad gold dinar is one of the rarest and most highly prized of all Islamic gold coins. It was struck from gold mined at a source owned by the caliph, and could represent a special issue struck while the caliph was traveling as he led the hajj, a pilgrimage to Mecca.

The origin of the gold is identified on the coin in text translating to “Mine of the Commander of the Faithful.”

An additional legend, “bi’l-Hijaz” (“in the Hejaz”), means it is the earliest Islamic coin to mention a location in the modern-day kingdom of Saudi Arabia.

The price paid for the Islamic gold dinar from the caliph’s mine nearly doubled the previous record price for a world coin sold at auction, which was £1,782,500, including the buyer’s fee, or about $2,820,091 in U.S. funds. That price was paid for a unique 1755 Elizabeth I gold 20-ruble pattern sold in a Nov. 6, 2008, auction conducted by St. James’s Auctions in association with Baldwin’s.

The identity of the winning bidder has not been disclosed. Chris Proudlove, representing the London firm, told Coin World that a United Kingdom-based bidding agent purchased the dinar for a European private collection, beating out four other bidders in the saleroom for a coin that had a pre-auction estimate of £300,000 to £400,000 ($426,963 to $569,284 U.S.).

Proudlove said the firm is “unaware of the buyer’s plans for the coin and [is] unable to comment on his motive or its future.”

Morton & Eden Islamic coins specialist Stephen Lloyd said: “We are absolutely thrilled and delighted with the results from this sale. We had worked very hard to promote these particular coins internationally, but the prices they have achieved have surpassed all expectations. Their success also demonstrates that sales by public auction are the only way to achieve the very highest prices for the very finest pieces.”

Scholars have identified the site of the mine as Ma`din Bani Sulaim, located northwest of the holy city of Mecca.

Gold has been mined at Ma`din Bani Sulaim for thousands of years, and the site is still worked today, according to Lloyd.

Medieval Arab writers record that the caliph bought a piece of land containing at least one gold mine, in the area referenced on the coin, and almost exactly when the coins were made.

While there is general agreement on the source of the gold, the question of exactly where these coins were struck is harder to answer, Lloyd said.

“The capital, Damascus, is a strong possibility, but mint workers and their tools could easily have traveled with the Caliph and struck coins wherever he stayed,” he said. “Scholars have noted that the dates of these very rare dinars seem to coincide with the occasions when the Caliph himself led the Hajj pilgrimage to Mecca, while an old inscription also shows that a road built specially for the pilgrimage went right past this mine. So one plausible theory argues that the Caliph visited his gold mines while en route to Mecca, and it is possible these coins might have been struck while he was traveling.”

Another star of the auction was one of the first Islamic coins struck in what is now the Sultanate of Oman.

“This coin reflects the importance of Oman and the Gulf region as a key commercial centre, then as now,” Lloyd said. ¦

Editor's note: Because of calculation errors, prices in U.S. dollar equivalents that appeared in an earlier versions of this story were wrong.