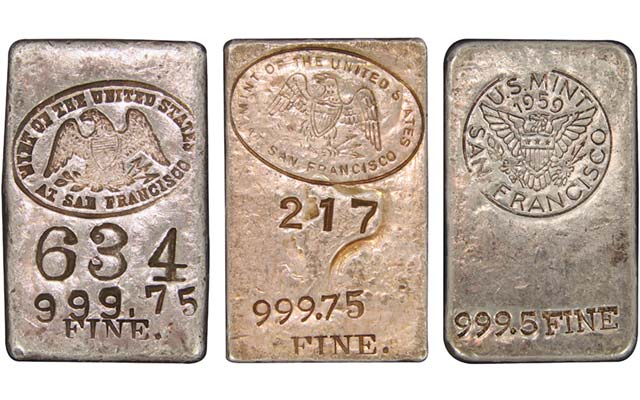 Shown left to right are Type I, Type II and Type III 5-ounce silver ingots from the San Francisco Mint, dating from the 1930s to late in the 20th century.

If you are a coin dealer, coin collector, or just a numismatic enthusiast, chances are good that you have encountered a U.S. government issued silver bar before. Silver bars or ingots were produced at the U.S. Assay Office at New York, the Philadelphia Mint and the San Francisco Mint, collectively, for almost 100 years, 1892 to 1984.

I have been collecting these historical gems over the past six years but find that information about their production is more scarce than the ingots themselves.

My research and collection efforts to date have focused on those produced at the San Francisco Mint in the 5-ounce class. I have been able to identify the various series that were made but continue to search for information that would certify a production timeline.

I have been writing about my findings and posting photographs for two years now on my blog. Hopefully, through this article I can reach out to Coin World readers to assist with this research.

Pictured here is an ingot that dates back to what I believe to be the very first series from the early 1930s, bearing what is known as a Type I oval hallmark. I have been able to approximate the dating of this particular type through a number of early 1930s coin auction catalogs by M.H. Bolender, Orangeville, Ill., and a documented donation to the American Numismatic Society on June 21, 1939, by David M. Bullowa. A note with the donation states that the donor purchased the ingot in 1935 for $5.

These Type I oval hallmark ingots were produced with three different font sizes, each with two different fineness stamps, 999.75 or 999.5, and then in a series without serial numbers, for a total of seven varieties. The latest of these was produced in the mid 1940s as evidenced by a receipt that is part of my collection. Accurate dating and chronological organization of all others remains the task to complete.

The Type II oval hallmark, also pictured, appeared around 1946 but is found on very few 5-ounce class ingots as it seems that most ingots being produced in that time frame were in the 25-ounce class range and larger.

If anyone has any information that will help with my efforts to accurately date and chronologically organize almost 150 5-ounce class examples presently in my collection, please contact me.

Ken Conaway discusses U.S. Mint silver bars at his blog at http://silveringot.blogspot.com/. He can be reached at kenconaway@aol.com or 614-571-0614.