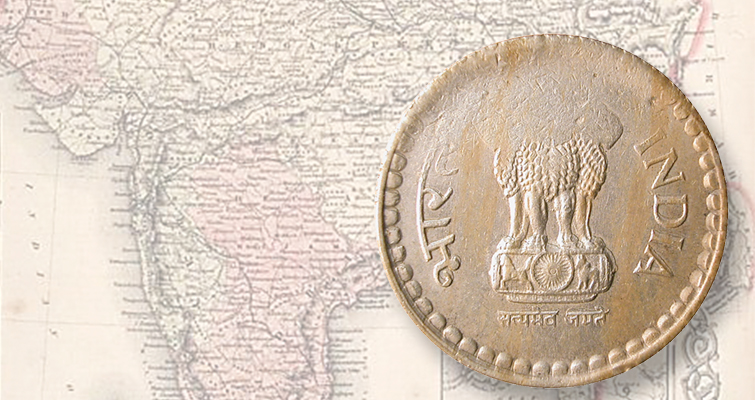 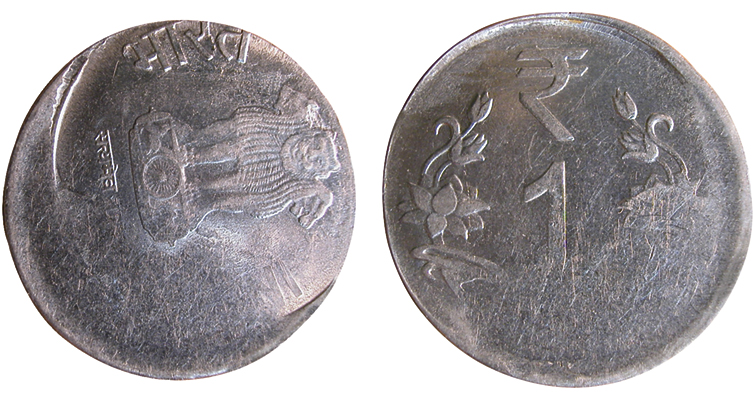 This broadstruck India 1-rupee coin shows three alignment errors affecting the hammer (obverse) die: a horizontal misalignment, a vertical misalignment, and a rotated die error. The coin normally would be in medal rotation. 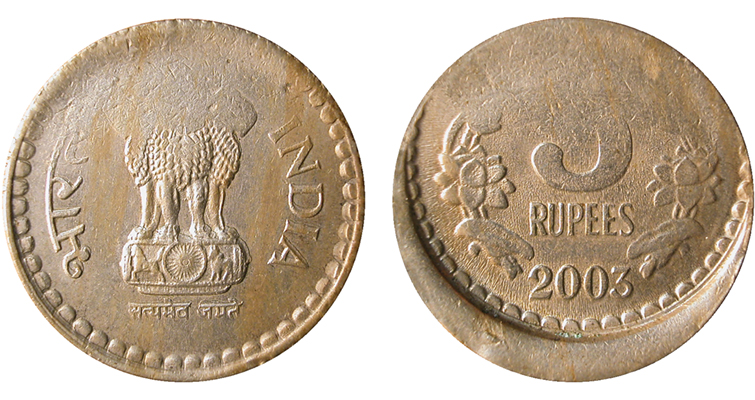 Indian coins provide a rich hunting ground for die alignment errors of all types. This is especially true for the current designs, which were introduced in 2011. Except for the 10-rupee denomination, the reverse face of these coins features a new rupee symbol, the denomination, the date, and a flanking pair of lotus plants.

Due to a severe horizontal misalignment of the hammer (obverse) die, the planchet’s position is best assessed by examining the reverse face, which was struck by the anvil die. The planchet was struck out-of-collar and in a slightly uncentered position. The reverse design is closest to the coin’s edge at 9:00, which means that the planchet slightly overshot the anvil die face at 3:00.

With the reverse face placed in normal medal rotation, we find that the obverse die was rotated 85 degrees clockwise. Superimposing a normally oriented clock face (again, in medal rotation) over the rotated obverse design, we can see that the obverse die was horizontally misaligned toward 1:30. The misalignment is difficult to quantify because the planchet was shifted toward the 3:00 obverse clock position during the strike. This has had the effect of making the misalignment appear slightly larger than it actually is. Still, I’m confident that the misalignment is at least 10 percent.

The trifecta of alignment errors is completed by a vertical misalignment in which the hammer die was tilted down at the 1:00 obverse clock position. The amount of die tilt cannot be quantified, but it probably amounted to only 1 or 2 degrees. Still, this was enough to leave a significant portion of the coin unstruck in the south-southwest region of obverse face and the corresponding south-southeast region of the reverse face. This is also the reason why much of the internal margin of the unstruck crescent produced by the horizontal misalignment failed to strike up.

The conventional relationship is demonstrated by a 2003 India 5-rupee coin that previously appeared in the Dec. 29, 2014, column. The hammer (reverse) die was tilted down at an angle of perhaps 15 degrees, with the downward-tilted pole located at 6:00. The hammer die was also 12 percent horizontally misaligned toward 12:00, the result being that the midpoint of the unstruck crescent’s internal margin is also located at 6:00.

There is no weakness on the obverse face opposite the unstruck crescent because of a very forceful strike into an exceedingly thick, compact planchet that weighs 9 grams. The thick planchet distributed the asymmetrically applied force more evenly and the powerful impact squeezed enough metal laterally to fill the recesses of the obverse die face. I am aware of three to four other examples indistinguishable from this one that were struck by this die pair.

This error backs up the common-sense assumption that, when a die tilts down, it also tends to tilt in, especially when the tilt is severe.

The 1-rupee coin has dismantled this heretofore solid relationship. The hammer die tilted down at 1:00, but the midpoint of the unstruck crescent’s internal margin is located at 7:30. In other words, the die tilted down but moved laterally in a direction nearly opposite to the one expected. I suppose one could compare the movement to what happens when you sock an inflatable punching doll in the face: the bag simultaneously tilts and slides away from you. My guess is that the die (or more likely, the die assembly) received an impact that generated that same the sort of movement.