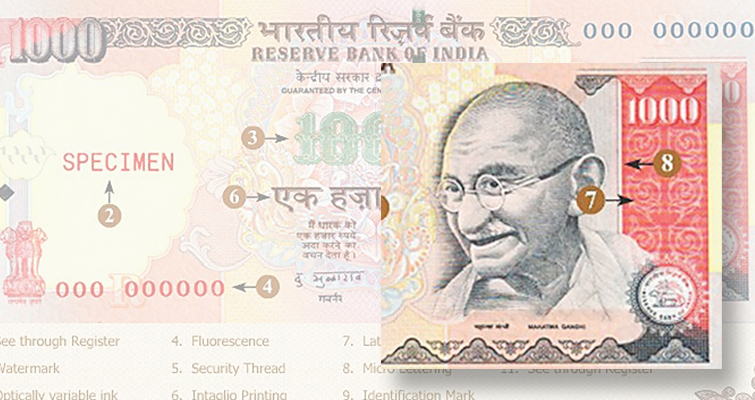 The government of India is replacing its current 1,000-rupee note, shown, with a new version having enhanced security features designed to fight counterfeiting.

The government of India has announced that in an effort to combat an abundance of counterfeit notes in circulation, seven as yet undisclosed new security features will soon be placed on its high denomination 500- and 1,000-rupee notes. After that, they will be introduced on other denominations no later than May 2016. As reported in the Economic Times of India, the blame for the bogus currency is placed on Pakistan’s Inter-Services Intelligence agency.

ISI is said to be the largest and most important of Pakistan’s three intelligence services, and according to the paper, “has been actively pumping fake notes into India.” In an effort to unleash a reign of economic terror, the spy agency has not, according to the report, limited itself to just bringing notes across the border from Pakistan, Bangladesh, and Nepal, but has also used Malaysia, Thailand, and Oman as transit points. It is also accused of using legitimate international courier services to transport the counterfeits.

The Central Board of the Reserve Bank of India recommended the new anti-counterfeiting measures, they have been approved by the government, and the notes are being produced by two government-controlled security printers. The current series of notes already has an impressive array of security features including watermarks, security threads, shifting images, microprinting, fluorescence, and optically variable ink, among other features.