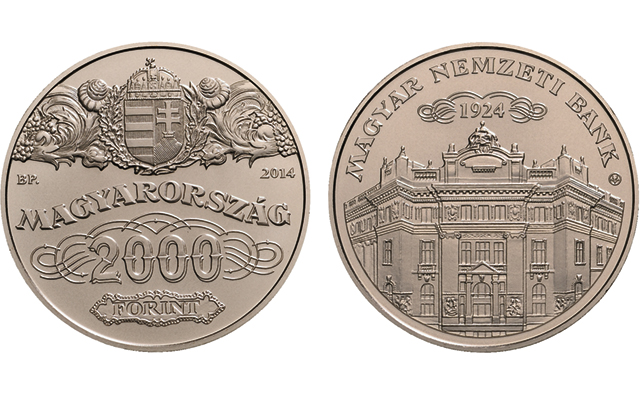 Hungary celebrates the 90th anniversary of its central bank with two new collector coins, including this Uncirculated copper-nickel 2,000-forint piece.

The fracturing of the Austro-Hungarian Empire during World War I laid the foundation of the modern National Bank of Hungary.

The independent central bank for Hungary, with authority to issue paper money, was established in 1924. The bank owns the Hungarian Mint, which struck the coins.

The coin was designed by Gábor Kereszthury.

The obverse motif alludes to the shares issued in 1924 during the bank’s foundation. The reverse depicts the façade in central Budapest of the 1924 bank’s main building, still the national bank’s headquarters today.

Both coins measure 37 millimeters in diameter and have a mintage limit of 5,000 pieces.

Dealer Coin & Currency Institute distributes new coins of Hungary and offers the silver coin for $69.50 and the copper-nickel coin at $19.50. Shipping and handling in the United States cost $5.75 per order.