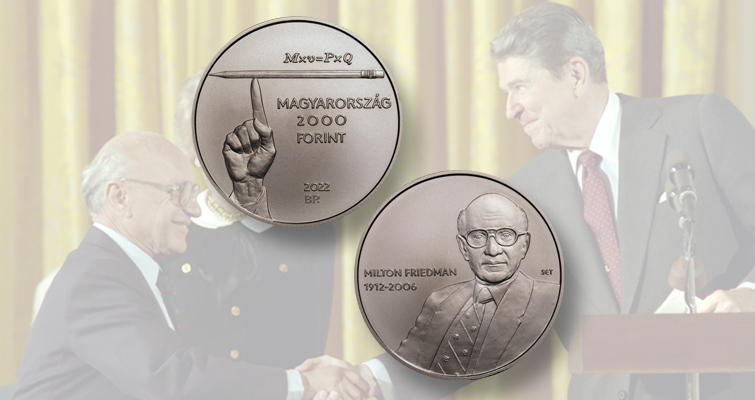 Famed economist Milton Friedman was born in 1912 in New York, the child of parents who moved to the United States from Beregszász, Hungary (now Berehove, Ukraine).

He was a central figure in the Chicago school of economics, which produced several Nobel Memorial Prize winners. Minimum government intervention and the free market system were the core elements of Friedman’s political philosophy and monetarist economic approach.

In 1976, he was awarded the Nobel Memorial Prize for his work on consumption analysis, monetary history and theory, and the complexity of stabilization policy.

In 1988 he was awarded the Presidential Medal of Freedom and the National Medal of Science.

The obverse shows Friedman’s hand balancing a pencil. The pencil, which he used regularly in his lectures, is a symbol of cooperation.

The reverse shows a portrait of Friedman. The legend MILTON FRIEDMAN is found in two lines to the left of the portrait, along with the dates of his birth and death, 1912 and 2006.

Both coins measure 38.61 millimeters in diameter with mintages limited to 4,000 coins.

Shipping and handling is an additional charge.

To order, contact the distributor, the Coin & Currency Institute, at www.coin-currency.com. 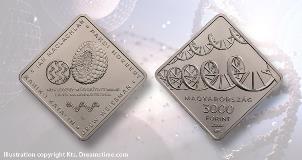 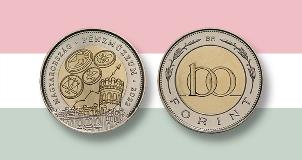 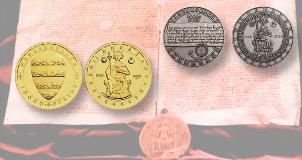