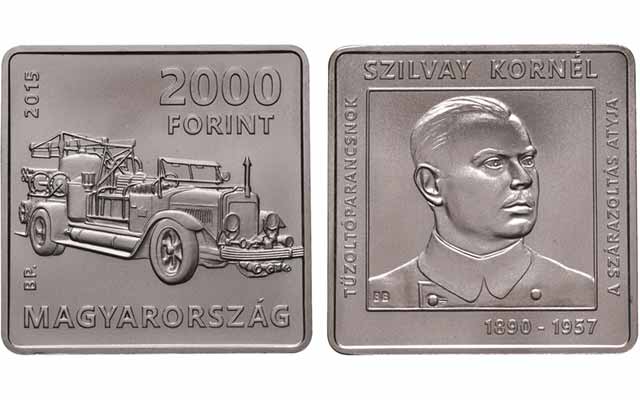 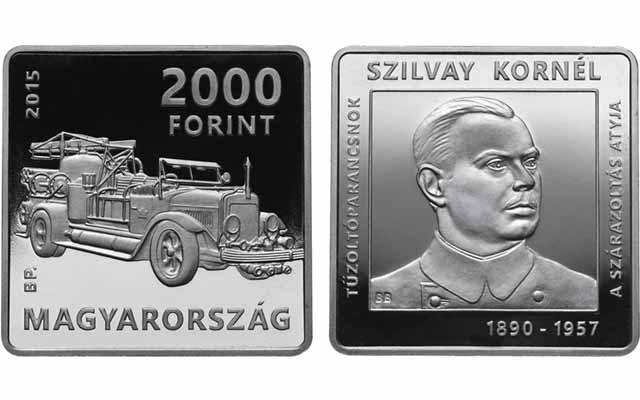 A Proof version of the 2015 copper-nickel 2,000 forint coin is also available.

The 10th issue in an annual series honoring Hungarian engineers and inventors and their innovations and inventions, celebrates the 125th anniversary of the birth of Kornél Szilvay.

Szilvay was one of the greatest figures in the history of Hungarian firefighting technology.

The Magyar Nemzeti Bank in Hungary on July 24 is scheduled to release 2015 Brilliant Uncirculated and Proof copper-nickel 2,000-forint coins celebrating Szilvay and his accomplishments in firefighting technology.

The obverse of the coins show the workings of his most important invention, the dry fire extinguisher on a fire truck. A portrait of Szilvay is on the reverse.

The coin was designed by Balázs Bitó.

When young, he developed an interest in technology. After finishing school, he was awarded a degree as a technician from the engineering faculty of the Budapest Industrial College. He became deeply interested in firefighting after participating in a firefighting drill during his school days.

After completing his studies, he became the plant firefighter at a factory and later joined the Budapest Volunteer Firefighters Association.

From 1914 he was a professional firefighter, first as a technical officer and later as senior officer. Recognizing the shortcomings of fixed hose firefighting, he focused specifically on modernizing firefighting equipment.

In 1923, he patented his invention, a fire extinguisher using an inert gas. Two of these extinguishers were added to the firefighting trucks and proved extremely effective in extinguishing small fires, with little collateral damage, according to the Hungarian Mint.

In his invention, exhaust gases from an internal combustion engine were cooled and pressurized by a compressor, and this gas was used to blow the extinguishing powder (soda bicarbonate) onto the fire, smothering the burning surface, and preventing re-ignition by blocking oxygen.

Production of the first dry fire extinguishers in Hungary began in 1925. The system was used successfully on its very first call when a fire broke out in the Gobelin hall of the National Casino.

The equipment was officially added to the firefighting system in 1928. This Hungarian invention was a hit at the international firefighting exhibition held in 1929 in Paris and received wide acclaim. Four dry firefighting units were used to successfully supress 95 fires in Budapest, according to the Hungarian Mint.

During his career, Szilvay took part in putting out thousands of fires. A career highlight was extinguishing the fire in the cupola of the Budapest cathedral on June 20, 1947 without any water damage.

Though Szilvay also held patents for some 38 other inventions, such as a valve closing in reaction to heat, a swimming pump, fire and explosion-proof cabinets, and the “alarmograph” fire alarm system, his name is associated mainly with his method of extinguishing flammable liquid and electrical fires.

He died Sept. 8, 1957, leaving a rich legacy as one of Hungary’s most outstanding inventors and fire chiefs.

The coins each weigh 14 grams and are square, measuring 28.43 millimeters on a side.

The BU version has a mintage limit of 4,000 pieces and the Proof version is limited to a mintage of 6,000 coins.

Want to read more about Hungarian coins? Coin World is the place!