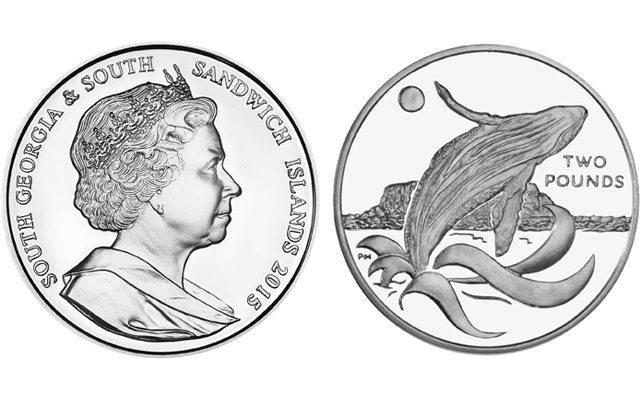 On behalf of South Georgia & South Sandwich Islands, the Pobjoy Mint has released a 2015 £2 coin featuring the humpback whale.

Found in oceans and seas around the world, the humpback whale is one of the larger species in the baleen whale family, and can range from 39 to 52 feet in length and weigh around 36,000 kilograms (about 79,366 pounds).

Humpbacks are the acrobats of the ocean, known for breaching and slapping the water, although the reason for these maneuvers is unknown. They are the noisiest and most imaginative whales when it comes to songs, having long, varied, complex, eerie and beautiful sounds and using the largest range of frequencies of any whales.

Humpbacks travel in large groups and when hunting they cooperate by blowing a wall of bubbles as they swim to the surface in a spiral path. Their prey of krill, plankton and small fish, in an attempt to escape the bubble wall, crowd together toward the surface of the water. Known as bubble-net feeding, the method assures the whole whale pod a large meal.

The reverse of the Humpback Whale coin features an image of a humpback whale breaching the Antarctic waters. An iceberg is in the background.

The obverse of the coin features an effigy of Her Majesty Queen Elizabeth II by Ian Rank-Broadley.

The design is offered in Uncirculated copper-nickel and Proof .925 fine (sterling) silver versions.

Each coin weighs 28.28 grams and measures 38.6 millimeters in diameter.

The Uncirculated version has an unlimited mintage and retails for $16.95 each.