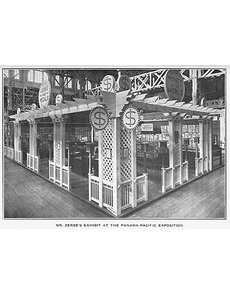 Farran Zerbe produced this display at the Panama-Pacific International Exposition in San Francisco, site of the 1915 American Numismatic Association convention. Only 12 ANA members participated, including, of course, Zerbe!Image courtesy of Q. David Bowers.

Offhand, a good measure of the “best” coin show might be the number of people who attended. However, no standard exists for measuring attendance.

Today, it seems that the all-time real record is the American Numismatic Association’s 2000 summer show in Philadelphia. This was the one where the “Ship of Gold” exhibit stretched across the front of the bourse. It was said that 20,000 people were there. But wait! Some years earlier, in 1976, 20,000 also attended the annual convention of the ANA in New York City.

In the very early days the measure of attendance at an ANA show was the number of registrations. For example, at the 1912 ANA convention in Rochester, N.Y., 55 people were registered. The 1913 show in Detroit saw an uptick to 56. The 1914 show in Springfield, Mass., counted 68 people.

Oops! At the 1915 show held in San Francisco, where members could attend the Panama-Pacific International Exposition, the gathering set a new low record for attendance of members. The Numismatist reported that the entire body present consisted of just 12 people! Never before at any ANA convention was attendance so sparse.

Why? My guess is that the ANA membership stayed away because they despised Farran Zerbe, who was to have a large display at the exposition, including new commemorative coins, and was to be a host at the convention. Zerbe had been disgraced for buying The Numismatist for his personal profit, instead of purchasing it for the ANA as everyone had supposed, and he had rigged the 1909 ANA election.

In the late 20th century “attendance days” were used, according to Edward Rochette, longtime executive director of the ANA. If a collector or dealer showed up on Wednesday and stayed until Sunday he or she was counted as five attendees! To that figure was often added a guess for others — such as unregistered spouses and schoolchildren attending.

An unrelated private large West Coast show went further, much further, and estimated the number of coming-in times each day. An attendee who had appointments or went out for lunch or to have a cigarette could be counted maybe a half dozen or more times on a given day!

Sometimes, shows that are almost as dead as a doornail are reported as being beehives of activity!

Next week: More “wiggly” statistics and numbers in our hobby!