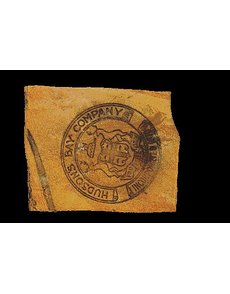 A skin counter token used by the Hudson’s Bay Co. in Canada is one of the marquee lots from the Morris Norman Collection of items related to the famed merchant explorers offered by Moore Numismatic Auctions’ Oct. 27 to 29 Torex sale.

The only publicly available skin counter token from the Hudson’s Bay Co. is one of the marquee lots in a collection of several hundred medals, tokens and scrip items related to the merchant explorers in Moore Numismatic Auctions’ October Torex sale.

The skin counter token is one of three known (the other two are in Canada’s National Currency Collection). It is pedigreed to the J. Douglas Ferguson Collection and earlier to the holdings of Wayte Raymond.

Cataloged as Gingras 205 in Medals, Tokens and Paper Money of the Hudson’s Bay Company by Larry Gingras, the token was used either on the Labrador Coast or in the Canadian Arctic, according to Gingras. The coat of arms of the Hudson’s Bay Co. appears on the rectangular piece, which dates to around or prior to 1850.

The example in the auction has an estimate of $10,000 Canadian.

The auction is scheduled to be held at the Hilton Toronto Airport Hotel, directly across from Toronto’s Pearson International Airport, in conjunction with the Torex coin show.

A printed catalog is available for $20. A PDF version can be downloaded from www.moorecoins.com and viewed on i-Collector.com, where live bidding is also available.

Canada, Hudson’s Bay Co., undated bronze Indian chief’s medal, 48 millimeters, by Conrad Kuchler, Gingras 100, rust and the extension of a die break on the reverse indicate that the medal is “probably a slightly later issue,” Lot 1210, Proof, “with a few light marks.”

Canada, Hudson’s Bay Co., Hudson Strait, Ralph Parsons, undated (circa 1910s to 1920s) copper token, 30 millimeters by 55 millimeters, 58.5 grams, Gingras 240K, “made from the end of the barrel hoop, with an overlapping piece from the other end of the hoop, and a lead rivet holding the two pieces together,” “believed to be of the highest rarity, if not unique,” Lot 1280, VF.

Canada, Newfoundland, 1881 silver 5-cent coin, Queen Victoria, Lot 3643, PCGS Specimen 66, “believed to be one of only two known specimens and the finest known.”

Canada, circa 2003 uniface plaster model for obverse of 2003 gold $100 coin, by Dora de Pedery-Hunt, 35 centimeters, obverse border not yet added, “acquired directly from the family,” Lot 3860, “choice and flawless.”