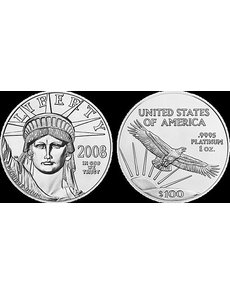 The House Committee on Financial Services has asked the Department of Justice for all records connected to a formal review of the legality of issuing a high-denomination version of the American Eagle platinum coin as a means of financing payment of government debts in case of a failure to raise the federal debt ceiling.

Republican officials in the House of Representatives want to know the Justice Department’s finding on the legality of issuing a high-denomination platinum coin as a means to finance government expenditures in case of a failure to raise the federal debt ceiling.

The government faces another possible budget crisis in February, when the government will become unable to pay its bills unless the debt ceiling is raised, according to the Treasury Department.

When Republicans and Democrats have clashed in the past on whether to raise the debt ceiling, some in the financial sector have advocated that President Obama use the authority granted him under the act authorizing the American Eagle platinum bullion coins to issue one with a face value of $1 trillion. According to proponents of the move, such a coin could then be credited to the government’s account with the Federal Reserve to cover government expenses in case the federal debt ceiling is not raised. Congressional action on issuing such a coin would not be necessary, according to supporters of the idea.

In response, officials of the House Committee on Financial Services on Dec. 20 asked the Department of Justice for all records regarding its review.

Late in 2013, media outlets, including The Hill and The Huffington Post, reported that Department of Justice “conducted a formal review of the legality of the issuance of a high denomination platinum coin to cover the costs of U.S. government obligations in the event of a failure to raise the federal debt ceiling,” according to a Dec. 20 letter from the House Financial Services Committee.

The letter cites news reporting based on documents The Huffington Post obtained from the Justice Department through a Freedom of Information Act request.

The letter calls for the Justice Department to “produce unredacted copies of all records produced pursuant to the FOIA request referenced ... and all records within the custody and control of DOJ which relate to the coin issuance proposal. ...”

Provision in the law

The provision in the U.S. Code that some proponents say gives the Treasury secretary the authority to produce trillion dollar platinum coins is in subsection (k) of Title 31, Section 5112.

The section states: “The Secretary may mint and issue platinum bullion coins and proof platinum coins in accordance with such specifications, designs, varieties, quantities, denominations, and inscriptions as the Secretary, in the Secretary’s discretion, may prescribe from time to time.”

Proponents of the idea state that this provision would make a platinum $1 trillion coin legal.

Opponents in Congress have introduced legislation that would limit the administration’s authority in issuing platinum coins to pieces with a denomination of no higher than $200. H.R. 220, the Stop the Coin Act, was introduced in the House on Jan. 14, 2013. The bill was referred to the House Committee on Financial Services on the same day; no action has been taken on the measure since. It currently has 24 co-sponsors, all Republicans. ¦