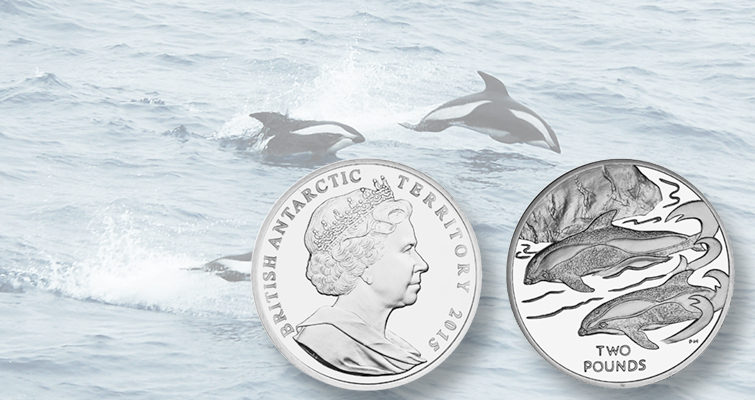 The Pobjoy Mint has issued a new commemorative coin for the British Antarctic Territory, showing the hourglass dolphin.

Pobjoy Mint has released a new coin on behalf of the British Antarctic Territory featuring the hourglass dolphin, continuing the series of coins showing the animals that live in or visit this frozen territory.

First described in 1824 during a French expedition to the Antarctic, the dolphin with Latin name cruciger, meaning “cross-bearing,” is more commonly called the hourglass dolphin, resulting from a different view of its distinctive markings.

This small species of dolphin has a compact body and striking black and white pattern and is generally found in a circumpolar band around the Antarctic. Hourglass dolphins can generally be seen in groups of eight animals or less, but larger schools of around 60 individuals have been reported. The hourglass dolphin is a keen bow-wave rider and often approaches boats from a distance at great speed.

The reverse on this 2015 coin shows a pair of hourglass dolphins swimming in Antarctic waters among the icebergs.

Two versions of the coin have been issued: an Uncirculated copper-nickel coin and a Proof .925 fine (sterling) silver coin.

Want to know more about the Pobjoy Mint? Check out these Coin World stories!