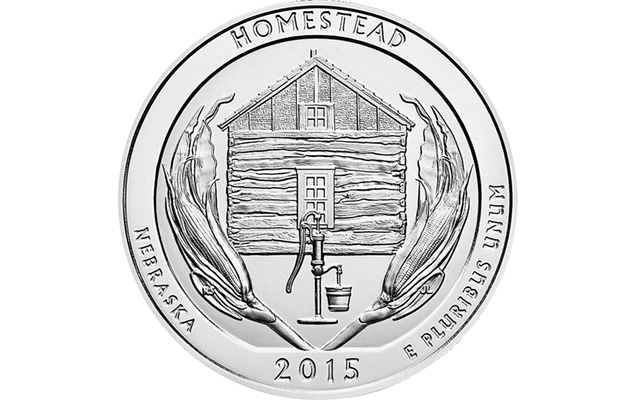 The 5-ounce silver bullion version of the 2015 Homestead National Monument of America quarter dollar goes on sale to authorized purchasers Feb. 17. Shown is the reverse design as it appears on the copper-nickel clad quarter dollar.

The U.S. Mint's authorized purchasers will be able to place orders beginning Feb. 17 for the 5-ounce silver bullion version of the 2015 Homestead National Monument of America quarter dollars.

At noon Eastern Time March 5, the Uncirculated version of the 5-ounce silver coin bearing the P Mint mark of the Philadelphia Mint goes on sale directly to the public from the U.S. Mint for $149.95.

Representing the state of Nebraska and the Homestead National Monument of America, the reverse of both coin versions depicts the three fundamentals of survival common to all homesteaders:  food, shelter, and water. The design was created by U.S. Mint Artistic Infusion Program artist Ronald D. Sanders and sculptured by U.S. Mint Medallic Sculptor Jim Licaretz.

The silver bullion version is sold to a network of authorized purchasers who buy the coins at prices based on the closing London PM silver price on a given day, plus a premium of $9.75 per coin.

The other four America the Beautiful quarter dollars and 5-ounce silver coins to be issued in 2015 are: