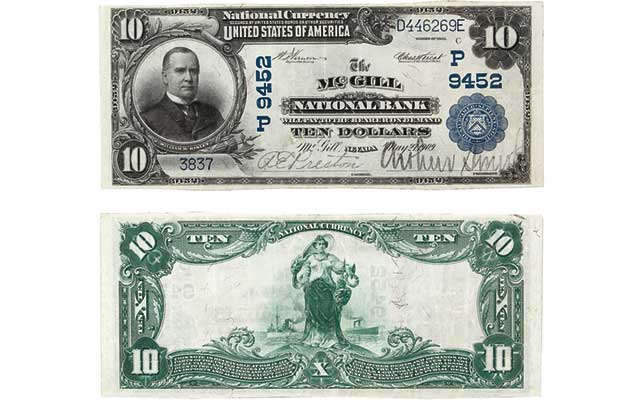 Uncirculated large-size Series 1902 $10 national bank note from The McGill National Bank in Nevada may be unique. 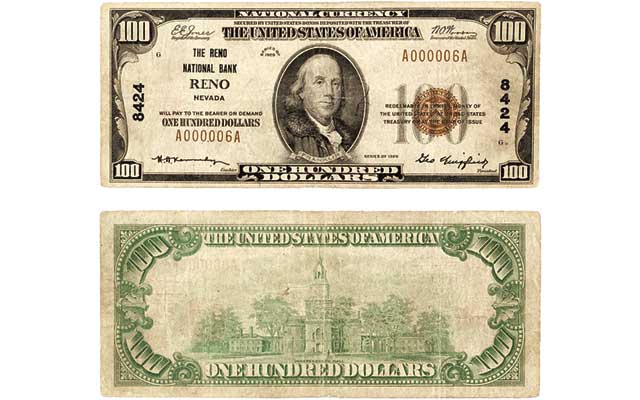 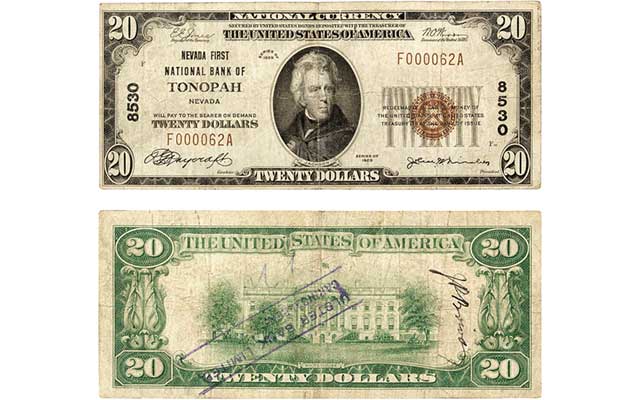 Tonopah, Nev., from which this $20 national bank note emanated was a major mining camp with approximately $150 million in gold and silver production before World War II.

Only one of the notes has been professionally graded by a third-party grading service, according to the firm's owner, Fred Holabird. The notes, from "an old Nevada collection," are currently being cataloged, Holabird said.

The single most valuable note appears to be an Uncirculated large-size Series 1902 $10 national bank note from The McGill National Bank that Holabird said may be unique. Research into that possibility is on-going, he said. The face of the note bears a portrait of President William McKinley.

When the McGill bank closed in 1934 only $1,210 in national bank notes from the bank was outstanding, Holabird said. “They got almost all of it back,” he explained.

In small-size notes, the auction also includes one $10 note and two $20 notes from the McGill bank, all Type 1 with low serial numbers. Series 1929 Type 1 notes bear serial numbers ending with the suffix letter A. Type 2 notes have a serial number ending with a number.

Holabird describes a large-size $10 First National Bank of Winnemucca note as gem. The sale also offers two large-size $50 notes from the bank. For small notes, there are two $5s, two $10s and a $20, all Type 1. The bank had $9,855 outstanding in notes when it closed in 1935, according to Holabird.

The First National Bank of Winnemucca was reportedly robbed by Butch Cassidy but that was never proven, Holabird said.

For the First National Bank of Ely there is one large-size $5 note, two $10 notes and one $20 note. Holabird said the $10 notes have different signatories. Ely was one of America’s largest copper mining camps that produced about $400 million in metals before World War II.

For small-size notes, there is one $5 note and two $20 notes, all Type 1, from the First National Bank of Ely.

In large-size notes for the Reno Farmers and Merchants Bank, single examples of the $10 and $20 notes are offered. For the Reno National Bank there are three $50 notes, all signed by Nevada mining financier George Wingfield, and a $100 note. The $100 note bears the serial number A000006A.

Wingfield rose from card dealer at the Tonopah Club in 1902 to become the richest man in Nevada five years later after taking his Goldfield Consolidated Mining Co. public. Wingfield subsquently owned many of the banks in Nevada, and numerous hotels, including the Riverside in Reno.

However, Wingfield lost most of his millions during the Great Depression.

In other small-size notes, there is a First National Bank of Reno $10 Type 2 note, PCGS 64, high grade and Uncirculated, Holabird said. For Reno National Bank, there are four $50 notes, including those with low serial numbers, and a Type 1 $100 with serial number 6, probably owned by one of the bank’s original officers, according to Holabird.

For the Farmers and Merchants National Bank of Eureka, there are two small-size $10 notes, one Type 1 note and one Type 2 note, and three $20 notes, all type 1, all with low serial numbers. Eureka was a silver mining camp, producing about $65 million before World War II.

For Lovelock there were two $10 notes, one Type 1 and one Type 2 issue, and a Type 1 $20 note. Lovelock was the commercial center for mines in the mountains north of town that included Seven Troughs and Mazuma.

For the Nevada First National Bank of Tonopah, there is one $10 note and one $20 note, both Type 1. Tonopah was another major Nevada mining camp with about $150 million in gold and silver production before World War II.

The bank of the $20 note bears a hand-written signature and is also ink-stamped with ULSTER BANK LIMITED / CARRIGALLEN. The Ulster Bank branch in Carrigallen, Ireland, closed its doors for the final time on May 24, 2013.

Other items in the September auction include:

??One of the best collections ever assembled of western Mechanics Fair and Agricultural Medals, highlighted by a Gold Mechanics Institute medal for replica of a steamship.

??California fractional gold pieces: about 100 from several collections, including some rarities. These are very small pieces with a face value of 25 cents, 50 cents and a dollar.

??More than 100 other numismatic collectibles, including American coin rarities set in sterling silver made by San Francisco silversmith George Schreve, including a rare 1891-CC Morgan dollar set into a small tray.

?? A major selection of Montana tokens from the Bob Svoboda collection that Holabird Americana is selling over a year.