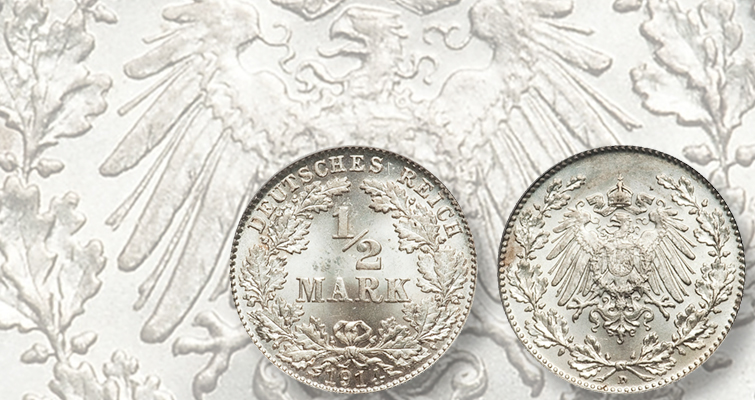 Coins like this German 1914-D half mark could be considered “cultural goods” under proposed regulations under review in Germany. If the regulations are enacted in current form, collectors and dealers watching the proposal’s progress warn that restrictions could be placed on sales and exports of coins. Images courtesy of Heritage Auctions. 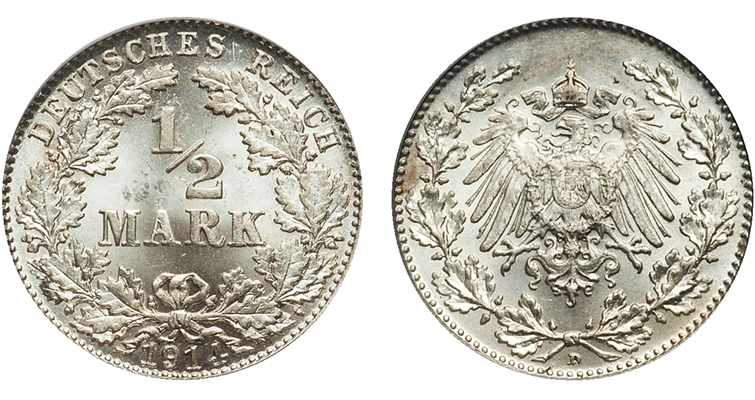 Coins like this German 1914-D half mark could be considered “cultural goods” under proposed regulations under review in Germany. If the regulations are enacted in current form, collectors and dealers watching the proposal’s progress warn that restrictions could be placed on sales and exports of coins. Images courtesy of Heritage Auctions.

Collectors in Germany and from around the world have signed a petition to fight tighter cultural property laws that have been proposed in Germany.

Ursula Kampmann, founder and publisher of CoinsWeekly.com, posted the online petition on July 21, and within 48 hours had received signatures from Germany and 57 other countries, including the United States.

The petition may be found at www.openpetition.de/petition/online/fuer-den-erhalt-des-privaten-sammelns.

Signers are fighting back against proposed regulations on the Protection of Cultural Heritage that Kampmann said threatens the collecting of cultural objects by private individuals.

Potentially restricted items include not only coins but other objects as well, according to Arthur Friedberg, a Vermont-based researcher and dealer in coins who is a past International Association of Professional Numismatists president.

The English language statement from the office of Germany’s Minister of Culture said the regulations are necessary to “improve the protection of cultural goods and take more effective action against trafficking in cultural property.”

New rules are also needed to comply with a European Union directive from 2014, but Germany would be the first nation to meet those demands, according to Ulrich Künker, director of the German auction house Fritz Rudolph Künker.

Künker and other hobbyists have reviewed the proposed regulations, but the regulations have not been made public officially.

Germany’s new laws are also intended to improve the implementation of the 1970 UNESCO Convention and bring German law in line with international standards, the Ministry of Culture said.

Künker adds, “I am afraid if this very strict law becomes active all other EU members will follow the hardliner law.”

Promises of hobby involvement in the discussion have not been honored, according to Künker.

“We have no chance to talk to the responsible persons to get our opinion to the ministry,” he said. “We spoke to ministry of culture, sent letters, said ‘please involve us in the process, we don’t want to hurt the market.’ They said, ‘we don’t want to talk to you.’?”

“Fortunately the entire German art industry and most of the collectors are against this law and I still have the feeling that many arguments are on our side,” Künker said.

“There are also good ideas in the law, all it needs is a discussion with all affected groups,” he added.

Under the proposed regulations, an American piece of art in a German collection could be classified as German cultural property, Friedberg said.

A promise to include special considerations for coins has also not developed as expected, Künker said.

“They understand that coins are different from other cultural property,” Künker said. “But they never sent a protocol, we’ve found nothing specifically different about coins in this draft.”

The proposed law will mandate a “reverse burden of proof” on collectors, according to Kampmann.

Per the proposed rules, the owner of a “cultural good” with a value of at least €2,500 would be required to provide proof as to the item’s provenance for the previous 20 years. This mandate would further affect “archaeological cultural goods” with a value as low as €100.

That could extend to just about every single coin that’s not bronze and many that are bronze, Friedberg said.

The rules also can apply to any German coin that’s over 100 years old, which would cover thousands of coins issued across German states for centuries.

“If this goes through you’ll never see a German coin at a United States coin convention again,” Friedberg said.

Not only would these laws stop future purchases, and sink the value of many coins, according to Kampmann, but retroactively, the new law would impose due diligence guidelines that are “impossible to follow even for the most meticulous collector,” she said.

Rules are fine, Künker said, but the process involving the regulations should be democratic.

“Let’s slow down, let’s talk about facts and not something we can’t imagine, and let’s try to find a solution.”

The claim that terrorist groups like the Islamic State in the Levant (ISIL, also known as ISIS) are plundering and trading in archaeological treasures as a major means of funding doesn’t match reality, Künker said.

“If you are talking about ISIS, we all agree that they are evil, but there is no evidence that there’s a connection between [ISIS and] the German coin market, the German art market, and it’s really frustrating,” he said.

“They [German government officials] are trying to do something good, but they are following the wrong opinion.”

Kampmann’s online petition aims at “preserving the right to privately collect,” and seeks cultural property laws that are not retroactive, do not require a reverse burden of proof, clearly define terms like “national cultural heritage” and limit claims by the state to items of a clear “cultural heritage” nature.

Items that are not deemed national cultural heritage must be allowed to move freely, and representatives of the hobby and trade must have a voice in making the new regulations, Kampmann said.

“You know what brings a smile to my face? All the numbers of Americans that are signing this [petition],” Künker said.