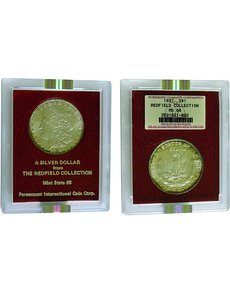 In a recent auction the author won the coin above. It is in the original Redfield/Paramount holder and has been band-labeled by Numismatic Guaranty Corp.

Image courtesy of Jim Haver of Star Coin and Currency.

Morgan and Peace silver dollars from one particular hoard in the original holders usually command premiums: the Redfield/Paramount coins. These coins came from the 407,000-coin stash found behind a false wall in the basement of Reno, Nev., investor LaVere Redfield.

The hoard was acquired for $7.3 million in 1976 by Steve Markoff of A-Mark Coin Corp. Markoff chose Paramount International Coin Corp. as a primary distributor of coins from the hoard.

Paramount slabbed the coins in attractive plastic holders with red or black inserts in two grades, Mint State 65 and MS-60, the only two grades used at the time.

A certain allure is felt in acquiring a “Redfield” dollar in a red-insert Paramount holder. In fact, the marketing format was so popular that Paramount began putting its own cache of non-Redfield dollars in similar holders.

So, Paramount dollars are sometimes mistaken for Redfield dollars. However, holders for coins from the famous hoard are labeled “A Silver Dollar from the Redfield Collection,” while nonhoard silver dollars simply list a grade and the name of the company.

Several grading services encapsulate and certify Redfield dollars, typically removing the coins from Paramount’s holders and listing the provenance on their own corporate labels. Numismatic Guaranty Corp. does not crack open the Redfield/Paramount holders but, rather, adds a label indicating the coin’s origin, adding to the appeal because the Redfield/Paramount holders have become as coveted by some collectors as the hoard itself.

“We put NGC band labels on both Redfield and plain Paramount holders,” says NGC’s Scott Schechter. “Only Redfield coins are pedigreed. These old holders are popular with collectors,” he adds, noting the bonus of retaining the provenance of these coins with an NGC-assigned grade. “They also allow us to preserve some of the history of our industry because these holders demonstrate the evolution of grading and encapsulation.”

It is typical for Redfield holdered, NGC-labeled coins to sell for a premium of $100 or more. Paramount dollars, sans the Redfield pedigree, also sell for high premiums. The shrewd home hobbyist buys an MS-65 Redfield or Paramount dollar for the retail price of what the coin would bring if graded MS-64 by NGC.

Michael Bugeja, a coin collector since childhood, is a professor at Iowa State University and also a member of the Citizens Coinage Advisory Committee.