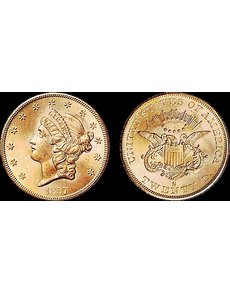 One of more than 5,000 Mint State 1857-S Coronet gold double eagles that were found on the treasure ship SS Central America. Could the market sustain so many coins being offered at once?Images courtesy of American Numismatic Rarities.

As I was deeply involved in the distribution, helping out with programs, and guest-cataloging for Christie’s remarkable auction in December 1999 that launched the marketing program, the narrative brought back some fine memories. The 11-pound book I wrote about it, A California Gold Rush History Featuring the Treasure from the S.S. Central America (a title suggested by Eric P. Newman after he read my manuscript) was printed to the extent of 4,000 copies, sold at various prices, mostly about $150. I suppose we should have printed 10,000! I cannot help but wonder if in today’s market for real honest-to-goodness printed books that many could be sold at that price level of any numismatic title.

As you probably know if you’re a constant Coin World reader, the account of the treasure find and distribution was designated by Coin World as among the most important news stories of 2000. If you attended the summer American Numismatic Association convention that year in Philadelphia you may remember the large “Ship of Gold” construction created to the order of Dwight Manley — the side of the ship, an assay office and more — that stretched across the front of the bourse floor. And, you may have been one of 400 people — an all-time record crowd — that attended treasure-finder Bob Evans’ Numismatic Theater presentation with me as a helper.

This was near the beginning of the sales program by the California Gold Marketing Group, which had more than 7,500 coins to deal with, including more than 5,000 Mint-fresh 1857-S Coronet gold $20 double eagles. More than 400 gold ingots also awaited buyers — in a marketplace in which no large California Gold Rush ingots had ever been sold before!

In particular, what about all of those double eagles? Would the market crash? We all wondered, but were optimistic that buyers would be found. And, found they were! Before long, each and every coin and ingot was sold. Today, you will be interested to know that nearly all of the treasure items have increased in value, and the prices of some have multiplied!

What better indication could be found of the strength of the numismatic market we all enjoy?