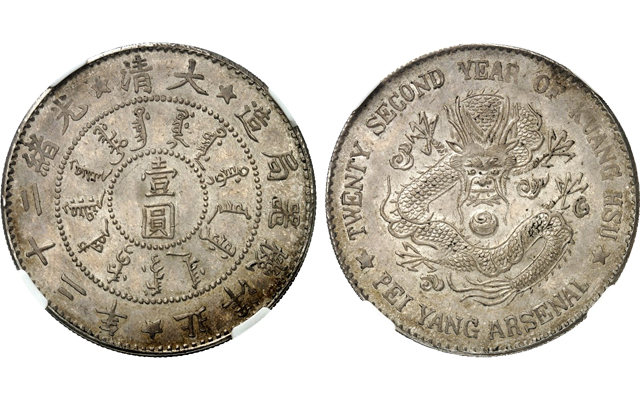 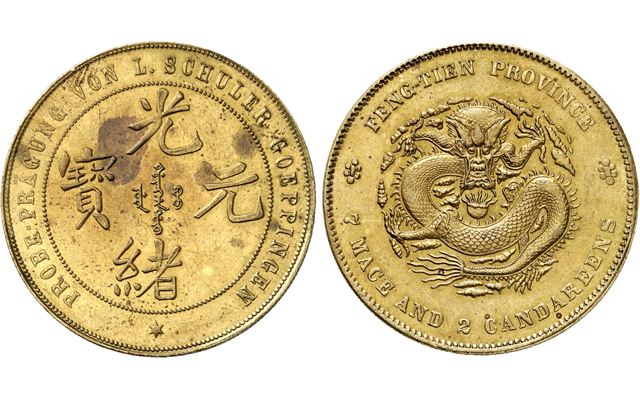 Two Chinese pattern coins with origins in Germany — they were struck by dies created by the Otto Beh Company on presses from the Louis Schuler Company — highlighted the March 2014 Künker auction. The undated circa 1897 brass 7 mace, 2 candareens (dollar) pattern realized €38,000 (about $52,730 U.S.).

The Year 22 (1896) coin was graded Mint State 62 by Numismatic Guaranty Corp., which notes that the grade corresponds to Extremely Fine to Mint State under the European grading standards.

The buyer’s fee varies depending on lot and location of the winning bidder, but may range from 15 to 23 percent, so it is not reflected in the totals here.

Other highlights include two pattern coins from Fungtien, in Fengtien Province. Both patterns reflect the growing need in China for minting technology as the country made the transition from traditional coinage to modern, machine-struck coins.

The patterns come from the archives of a German firm, the Otto Beh Company. Beh was a subcontractor for the Louis Schuler Co., another German firm also in the state of Baden-Wurrtumberg. In 1895, Schuler received the contract to provide presses and minting equipment to China, and Beh was subcontracted to complete the dies (called “minting stamps” in the catalog). Beh produced more than 200 “embossing punches” for the order, which was the firm’s largest to that point.

In 2009 the Beh Company celebrated its 125th anniversary, and a catalog of the medals, badges and pins it has created was issued.

The auction was one of four conducted across five days (March 10 to 14) in Osnabrück. Together all four sales (in total containing 6,129 lots) realized a hammer price estimated at €8.75 million (about $12.1 million dollars U.S.).

Catalogs and results of the firm’s spring auctions may be viewed online at the firm’s website, www.kuenker.de. For more details, telephone the firm at (011) 49 541 96 20 or email it at service@kuenker.de.