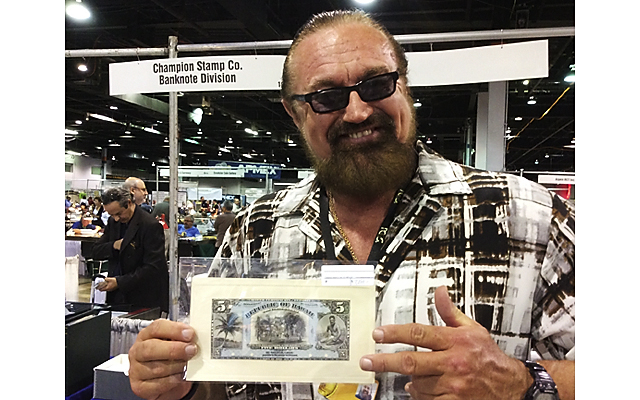 Jim Morris, also known as "Hillbilly Jim," can be (easily) spotted at several major coin and currency shows each year.

Jim Morris stood out walking the aisles of the American Numismatic Association 2014 World’s Fair of Money in Rosemont, Ill., on Aug 7.

That’s probably because the 6-foot-7, 330-pound former professional wrestler would stand out most anywhere.

Morris, a staple in the booth of New York based Champion Stamp Company Inc., during several major numismatic events each year, was known as "Hillbilly Jim" during his days in the World Wrestling Federation (now known as World Wrestling Entertainment) from 1983 to 1993, when the Kentucky native would don a full beard and overalls, wrestle with a rugged, nontechnical style, and finish his opponents with his signature bear hug.

“It was easy to pull off,” the southern-accented Morris said of Hillbilly Jim’s persona. “A hillbilly’s always going to be a friendly, talkative guy anyway and it’s perfect for me.”

The 61-year-old certainly shows that "friendly, talkative" side as he works the Champion booth at the World’s Fair of Money. He became interested in paper money and coin after starting to work for Champion owner Arthur Morowitz’s home video business when his wrestling career ended following neck surgery. While he doesn’t consider himself an expert, he said he knows enough to chat up show attendees.

Morowitz dryly pokes fun at Morris, saying he can identify any stadium in the world if he lays on his back and looks up at the ceiling.

“He’s almost good for nothing, except for talking to people,” the boss jokes as Morris laughs nearby.

When asked what he would say his title at Champion is, Morris grins.

“They really just call me the chief jackass,” he said. “I show up and have a good time. I’m the good humor man.”

Morris, who wrestled with WWF superstars including Andre the Giant, Randy "Macho Man" Savage, Jesse “The Body” Ventura and Hulk Hogan, and recently appeared on the WWE Network reality TV show WWE Legends’ House, said he is recognized at the ANA show more for being a numismatic regular than a pro wrestler.

“I know lots of these people here today because I’ve seen them for years and years,” Morris said.

He collects paper money and some coins himself.

“If you’re collecting, it don't matter if it’s paper or coins as long as it’s something you have a passion about,” Morris said. “I think the hobby is just amazing.”

Keep up with CoinWorld.com's news and features: