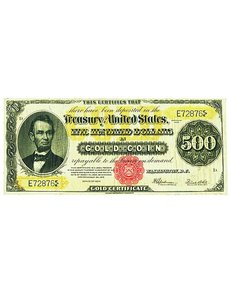 The American Numismatic Association World’s Fair of Money held in August near Chicago lived up to collector expectations, and as far as paper money was concerned, there was little to be disappointed about.

The selection of high-end notes offered during the ANA convention was a sign of more to come.

An example of a post-ANA show sale is the Heritage Auction Galleries Sept. 7 to 9 Signature Currency Auction, conducted during the Long Beach Coin, Stamp & Collectibles Expo in Long Beach, Calif.

More than 5,600 lots were offered, just about evenly split into large- and small-size note categories. (All prices quoted here include the buyer’s fee.)

The highlight lot is one of only five known Series 1882 $50 gold certificates, Friedberg 1190 (Paper Money of the United States by Arthur L. and Ira S. Friedberg); the note, graded PCGS Currency Fine 15, sold for $20,700. This was the first auction of one of these notes in close to five years.

Accompanying the note is a handwritten bank envelope signed by Wellborn and attesting to his ownership.