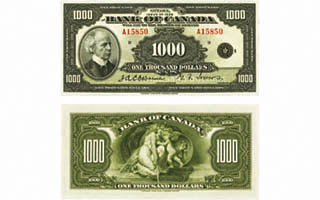 This 1935 $1,000 Bank of Canada note with English text features a vignette of Canada's seventh prime minister, Sir Wilfrid Laurier, on the face. 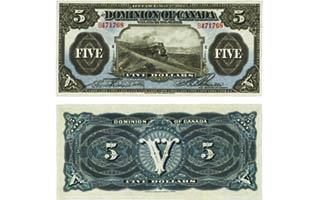 A vignette of the passenger train Ocean Limited is depicted on the face of a 1912 $25 Dominion of Canada note. The back design features intricate lathework.

More than 700 lots of world notes will be offered April 24, 2014, during the Heritage World Currency Signature Auction scheduled during the Central States Numismatic Society 75th Anniversary Convention April 23 to 26 in Schaumburg, Ill.

Two named collections of world notes will be offered — the Ruth W. Hill Collection and the Northern Lights Collection.

Among the lots to be offered is a 1935 $1,000 Bank of Canada note with English text that makes use of an allegorical female figure in keeping with the style often used on classic notes issued in the 19th and 20th centuries.

Paper Money Guaranty graded the note Gem Uncirculated 65 Exceptional Paper Quality. The note, from the Northern Lights Collection, is estimated to bring $17,500 to $33,500.

Climb aboard the passenger train Ocean Limited and travel through the Wentworth Valley in Nova Scotia as depicted on the face of a 1912 $5 Dominion of Canada note (Lot 21056), part of the Northern Lights Collection.