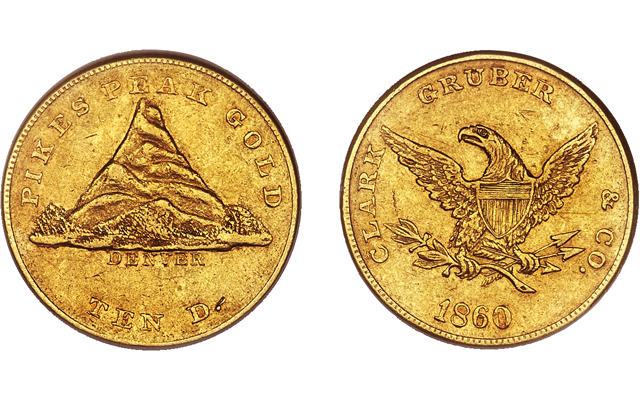 The Clark, Gruber & Co. gold $10 coin introduced in 1860 features Pikes Peak as the central obverse design and an eagle reverse. 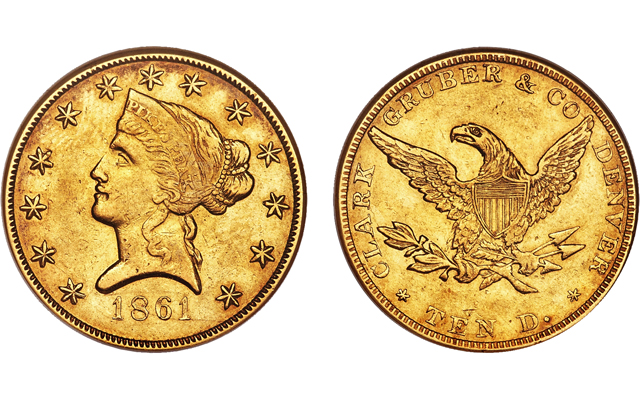 The reverse of the 1861 Clark, Gruber & Co. gold $10 coin bears a slightly modified eagle compared to what appears on the quarter eagle and half eagle for the series. 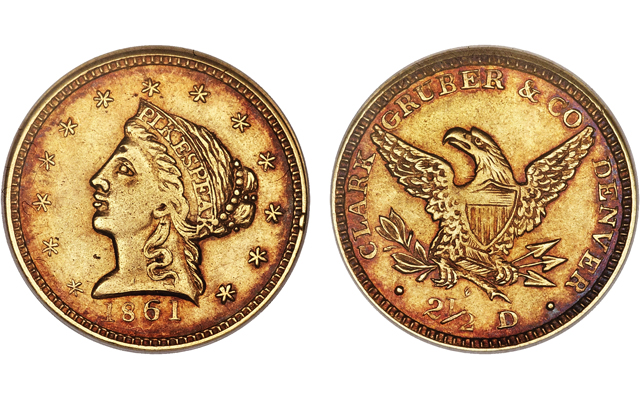 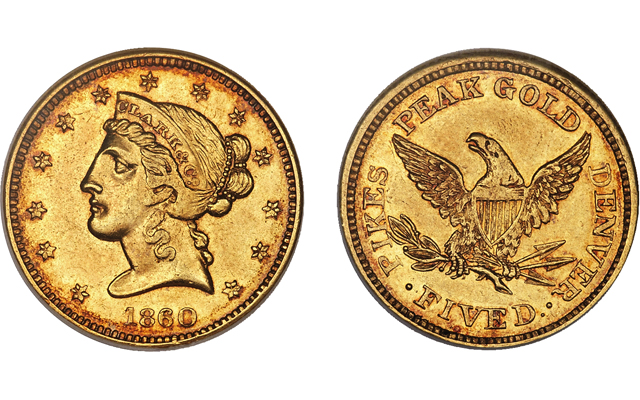 The obverse of the 1860 Clark, Gruber and Co. $5 coin resembles the design from the federal Coronet $5 half eagle, except the portrait bears CLARK & CO. inscribed on the coronet rather than LIBERTY.

The Twin Peaks Collection to be offered in July by Heritage Auctions includes gold coins struck by the private Colorado minting firm of Clark, Gruber & Co., the forerunner of the Denver Mint.

The collection is included in the 3,276 lots to be offered by Heritage July 9 to 13 in Orlando, Fla., in conjunction with the Summer Florida United Numismatists Convention.

Among the Twin Peaks coins to be offered are an 1860 Clark, Gruber and Co. $5 half eagle, Kagin 2, graded Mint State 61 by Numismatic Guaranty Corp., and an 1860 Clark, Gruber & Co. $10 eagle, K-3, graded NGC About Uncirculated 58. The Kagin numbers are variety attributions, cataloged by Donald H. Kagin in his reference Private Gold Coins and Patterns of the United States.

Clark, Gruber & Co., a private minter and assayer headquartered in Denver, only struck gold coins in 1860 and 1861.

The gold coins were struck from Colorado-mined gold.

The U.S. Mint purchased the Clark, Gruber & Co. building in Denver and established a federal Mint there in 1863.

According to the U.S. Mint’s website: “For its first 46 years, the United States Mint at Denver was only an assay office in the Clark, Gruber and Company Bank Building. Miners brought in gold dust and nuggets to be melted, assayed and cast into bars stamped with their weight and quality. By 1895, the Assay Office was booming, bringing in more than $5.6 million in gold and silver deposits annually.

“In 1904, the government decided to convert the Assay Office into a working mint, and built a much grander facility, an Italian Renaissance style building modeled after a Florentine palace. In 1906, its first year in operation, the new Mint produced 167,371,035 gold and silver coins, valued at $27 million.

The obverse of the 1860 Clark, Gruber and Co. $5 coin resembles the design from the federal Coronet $5 half eagle, except the portrait bears CLARK & CO. inscribed on the coronet instead of LIBERTY. The reverse features an eagle with its wings outstretched, with PIKES PEAK GOLD DENVER and FIVE D. inscribed around.

The 1861 Clark, Gruber and Co. $2.50 coin features a similar obverse to the $5 denomination of 1860, but the coronet inscription reads PIKES PEAK. The reverse eagle is similar, except the eagle is larger, has a more prominent head and is positioned differently in relation to the lettering. The reverse inscriptions read CLARK GRUBER & CO. DENVER , 2½ D.

Both the quarter eagle and half eagle varieties are listed with a Rarity 4 rating, suggesting 76 to 200 pieces known.

The Kagin 3 1860 gold $10 coin features a rendition of Pikes Peak as the central obverse device, with PIKES PEAK GOLD and 10 D. inscribed around. The reverse features an eagle with outstretched wings, with the inscription around CLARK GRUBER & CO.

The obverse for the Kagin 7 1861 eagle features a coronet style obverse portrait with PIKES PEAK inscribed on the coronet. The reverse bears an eagle that is slightly different from what appears on the quarter eagle and half eagle varieties offered in the sale. The reverse inscription for the $10 eagle reads CLARK GRUBER & CO. DENVER and TEN D.

For more information on the sale, visit the Heritage website at www.ha.com.