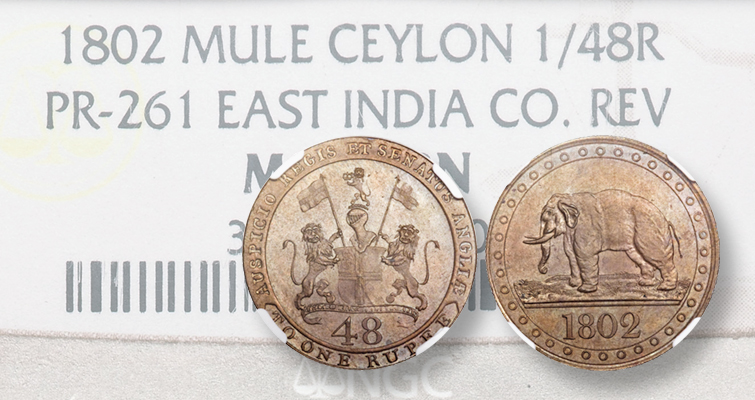 A British Colonial “mule” coin is one offering in Heritage Auctions’ inaugural Hong Kong auction, scheduled from Dec. 10 to 12.

A mule with an elephant and two lions sounds like the start of a bad zoological joke, but it describes a lot in Heritage Auctions’ inaugural Hong Kong auction, slated for Dec. 10 to 12.

The piece in the sale is a mule, the result of being struck by two dies that were not intended to be paired together. The resulting British colonial coin features the obverse design of the circa 1794 East India Company 20-cash coin issued under the Madras Presidency (which shows two lions), with the reverse of the 1802 Ceylon elephant 1/48-rixdollar coin.

The firm’s first official auction under the auspices of its new Hong Kong office is the official auction for the inaugural Hong Kong International Coin Fair, according to Cristiano Bierrenbach, vice president of Heritage Auctions. The auction offers an array of Asian coins and paper money.

From here on out, the show, and Heritage’s Hong Kong Coin and Currency auctions, will be held twice a year, in June and December.

Though the auction will take place at the Hyatt Regency, Heritage’s new Hong Kong offices are officially open and located in the Lippo Center, Unit 1105, 11/F, Tower 1 Lippo Centre, No. 89 Queensway, Hong Kong.

“We are making the Heritage auction platform directly accessible to the Asian market both in consignor and bidder services through our Hong Kong location,” said Kenneth Yung, director of Asian Operations for Heritage Auctions.

To learn more about the sale, visit the Heritage Auctions website. 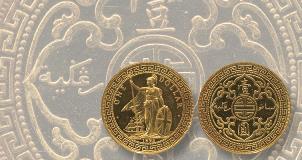 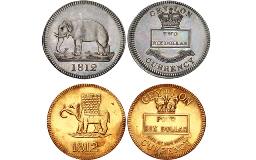