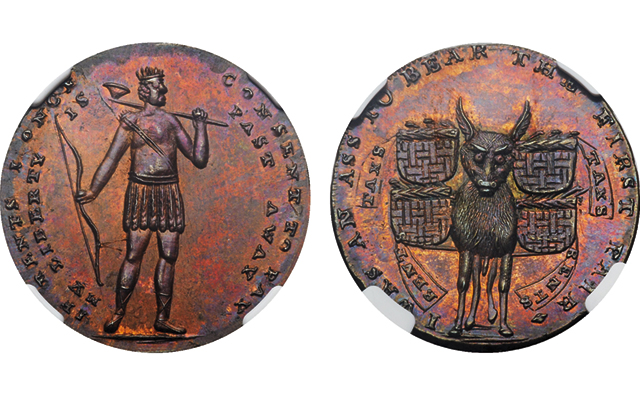 The Indian on this halfpenny token is identifiable, but what is the animal on the other side? The chupacabra-like animal is actually a donkey bearing two pairs of baskets, labeled RENTS and TAX’S, with the motto I WAS AN ASS TO BEAR THE FIRST PAIR surrounding. Graded Mint State 65 red and brown, it carries an estimate of $300 to $400. 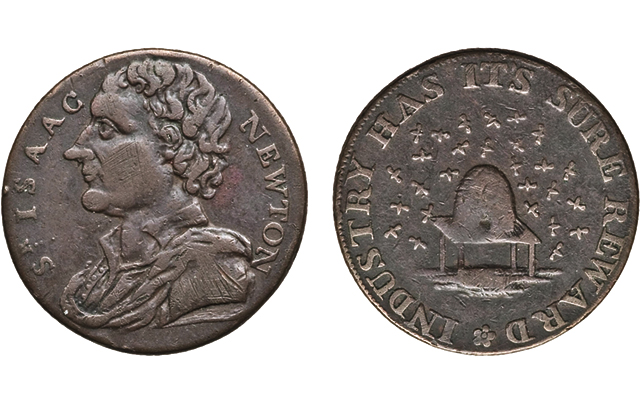 This farthing token depicts Sir Isaac Newton on the obverse while the reverse has bees swarming a hive, with the legend INDUSTRY HAS IT’S SURE REWARD. The piece is paired in one lot with another token, and the two pieces, each graded about Very Fine, together carry an estimate of $50 to $75.

Heritage Auctions will offer a large collection of more than 300 “Conder” tokens in its Oct. 2 World and Ancient Internet Coin Auction.

“Conder” tokens are the popular name given to a wide variety of British merchant and trade tokens of the late 18th century. They are also collected under the broad category of 18th century Provincial tokens.

The tokens were made from locally mined copper in Britain, initially in answer to a need for small change in Britain. They would quickly become popular as collectibles and, as a result, examples of most types exist in both well-circulated condition and in Mint State grades.

Generally the edges carried edge lettering identifying who produced it and as a security device to prevent the piece from being altered to reduce the weight.

According to Heritage, “Few Conder token collections are as impressive in terms of size or the number of rarities they contain” as the Marshall Collection of Conder Tokens, as the offering is called.

“There are two parts to this collection, and the second part starts October 2, right after this one closes. This is the first of a series of special Monthly auctions that we are holding. ... After the Marshall Collection of Conder Tokens is sold, we have a second collection of Conder tokens that will be sold in November,” according to Heritage.

The tokens depict a huge variety of subjects, from political commentaries, to advertising themes, to documentation of architecture, to portraits of famous historical figures.

By 1795 the supply of the tokens exceeded demand. The public grew tired of them, and production of 1- and 2-penny coins by the government in 1797 functionally ended the utility of these tokens.

These tokens are popular with today’s collectors because they are affordable at a variety of levels. Some sell at the $20 to $30 level while others sell for more than $1,000.

Several references to the series are widely available, and an international organization, the Conder Token Collector’s Club, offers a journal aimed at fans of the tokens.