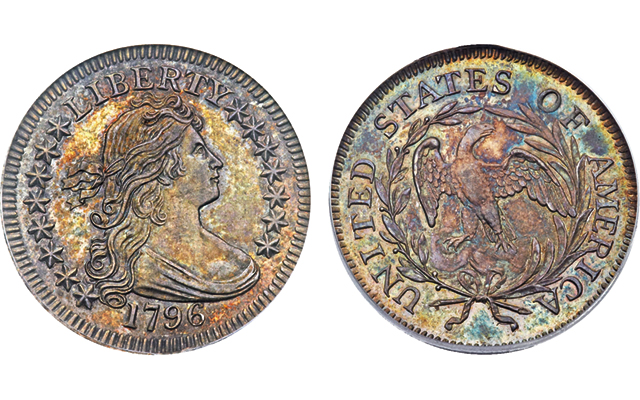 A toned 1796 Draped Bust quarter graded MS-65 was once in the collection of the Norweb family. 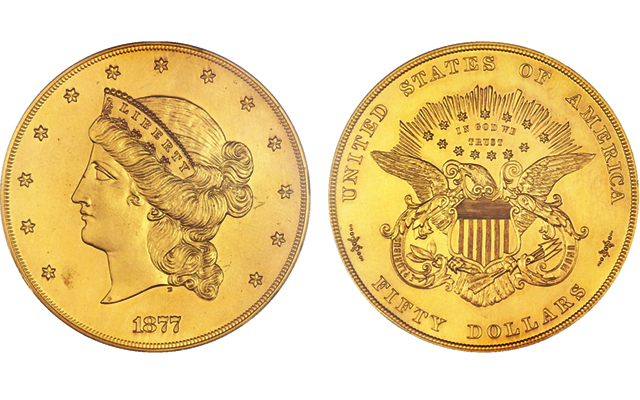 This gilt 1877 $50 pattern “half union” was once in the collection of Egypt’s King Farouk.

One of the largest items offered is an 1877 gilt copper $50 pattern, nicknamed a “half union.” Two design types exist, and one of each design was struck in gold. Others were struck in copper and some were gilt, although it is unclear whether the gold plating was done at the U.S. Mint at the time of production or later elsewhere.

The inspiration for the $50 patterns came from gold $50 “slugs” produced in California in the 1850s, and Mint Superintendent Henry Linderman (an avid coin collector) likely produced this issue as a pet project. The two gold “half unions” are housed at the National Numismatic Collection at the Smithsonian Institution where they are a collection highlight.

Heritage notes that this specific example’s early history is unknown, but it appeared in a 1948 B. Max Mehl sale and later was in the massive collections of Egypt’s King Farouk.

1796 represented the first year of the quarter dollar denomination, and the Draped Bust obverse combined with the Small Eagle reverse would constitute a one-year type, as the denomination would not be issued again until 1804, then with a Heraldic Eagle reverse.

It is one of the finest existing 1796 quarter dollars and Heritage defines the fields as “fully and obviously prooflike,” further noting, “Steel, russet, and sea-green toning enhances the underlying deep golden appearance.”

When previously offered at Heritage’s Aug. 11, 2010, American Numismatic Association auctions it sold for $322,000.