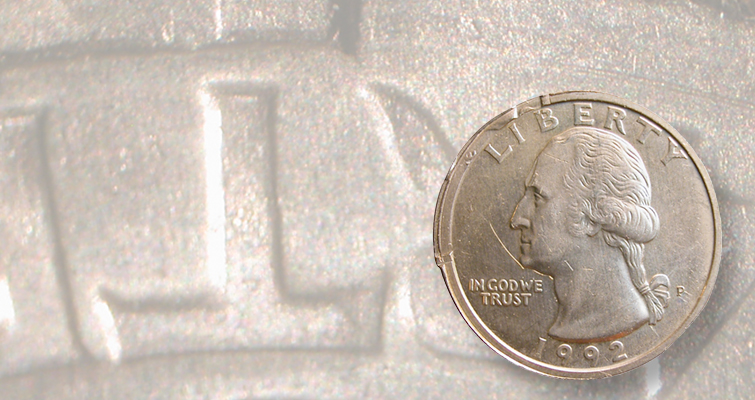 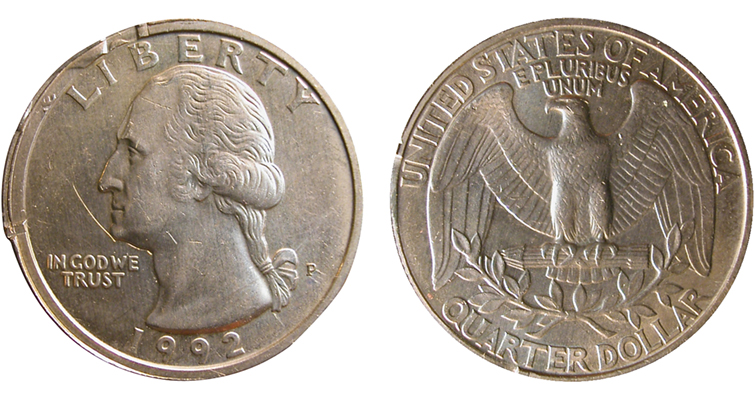 This 1992-P quarter dollar shows an unusually strong but otherwise normal first strike followed by a 75% off-center second strike that touched down on the design rim and virtually nowhere else. 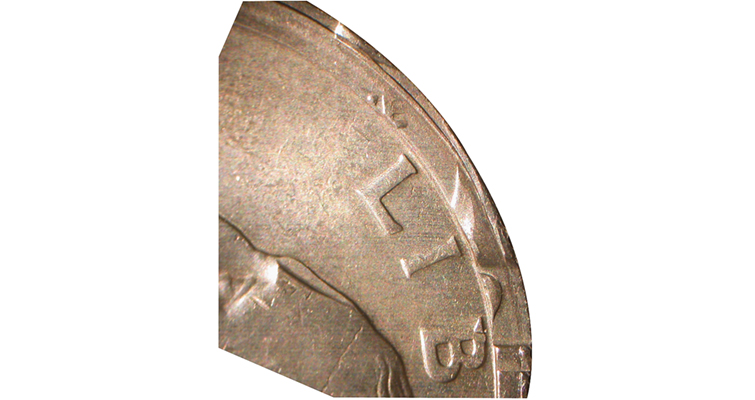 Several second-strike design elements can be seen on top of the obverse design rim. To aid recognition, these elements are oriented vertically in the photo. 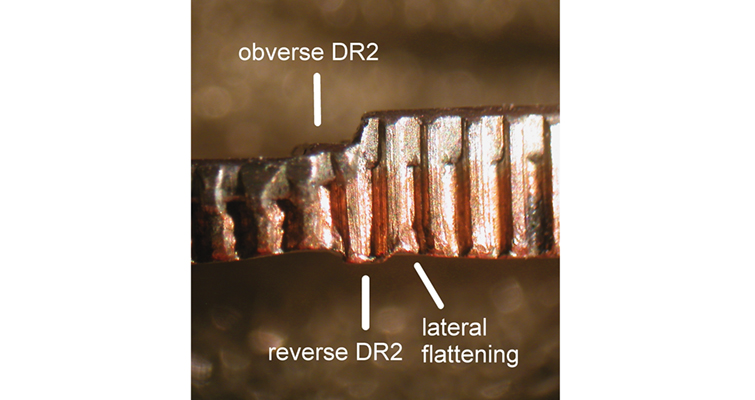 A slight misalignment is detected when the two opposing second-strike design rims are viewed on-edge. Lateral flattening on the reverse face probably represents a collar scar. 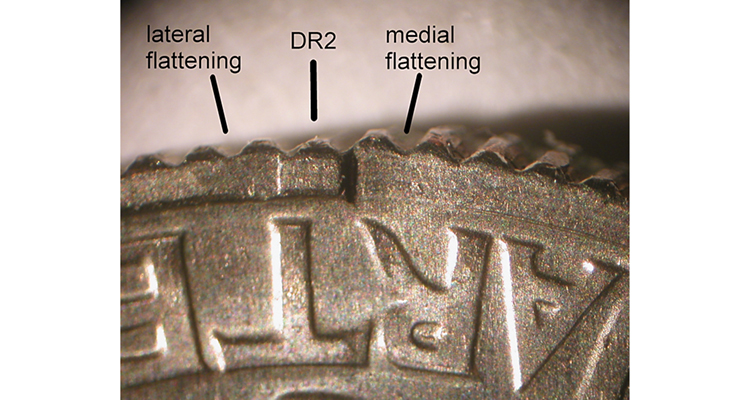 Apart from the second-strike design rim (DR2), no other identifiable features can be seen on the reverse.

A weak strike preceding or following a normal strike is a well-documented phenomenon (Collectors’ Clearinghouse, May 23, 2011; April 8, 2013; June 23, 2014). Instantaneous changes in ram pressure or minimum die clearance are the two proximate causes, with the second factor responsible in most cases. What’s happening in the guts of the press to cause these fluctuations can never be ascertained, but the list of possible malfunctions is long.

If minimum die clearance increases after a normal strike, and the gap between the dies matches the vertical height of the coin’s edge, the second strike will be restricted to the design rim, which is the area of highest relief.

In the May 13, 2013, column I discussed a 2005 Lincoln cent with a normal first strike and a second strike that was slightly off-center, die-struck on both faces, and restricted to the left side of the original design rim. At this year’s American Numismatic Association show, error dealer Mike Maino showed me an even more intriguing coin.

The first strike on Maino’s 1992-P Washington quarter dollar was in-collar and abnormally strong, presumably reflecting elevated ram pressure. The design rim on each face is sharply squared off, indicating that coin metal completely filled the rim gutter of each die. Moreover, the left side of each design rim shows marked finning. This is where coin metal squeezed into the narrow gap between die neck and collar. Since the fins appear only on the left side, it would seem that one of the dies was slightly tilted.

The rim-restricted second strike is about 75 percent off-center, with the coin having rotated 90 degrees clockwise between strikes.

The dies were free of blemishes and the design crisp, indicating an early die state and a mishap early in the production run.

The absence of die markers on the first strike, along with the limited amount of design present on the second strike, makes a microscopic comparison of the two surfaces impossible. Nevertheless, it’s reasonably safe to assume that the same die pair was responsible for both strikes. Quarter dollars are not struck in dual or quad presses, so there’s no adjacent striking chamber to which a coin can migrate.

On the obverse, the first-strike design rim (here abbreviated DR1) carries the underside of Washington’s chin, the lower front corner of his bust (minus the tip), portions of the word WE, and the first 9 of the date. A little bit of the interior design was also touched by the second strike. The tail of the same 9 continues onto the B of LIBERTY. The back of that letter and the front of Washington’s forehead were slightly flattened by the field portion of the obverse (hammer) die. Bracketing all these features is the second-strike design rim (DR2), which crosses DR1 at 8:45 and 11:30.

On the reverse, the second strike presents a puzzling appearance because no recognizable design elements are perched on DR1. This face was nevertheless clearly die-struck because DR2 crosses DR1 at 6:30 and 9:30. Between these two points we should be seeing some interior design elements, including the EL of PLURIBUS and the E of STATES. But reverse DR1 is merely flattened, and to a lesser degree than obverse DR1. The greatest amount of flattening is located next to the medial side of each DR2 segment. But unlike the obverse face, there is also flattening on the lateral side of each DR2 segment. Since nothing lies beyond the rim gutter on the die itself, I can only surmise that this is the impression of a closely-fitting collar that lacked a beveled entrance. The heavy steel ring likely provided much of the resistance to the impact of the obverse die and simultaneously softened the impact of the reverse die.

A final observation worth mentioning is a slight misalignment of the obverse die during the second strike. When viewed on edge, obverse DR2 is seen to be slightly offset from reverse DR2.