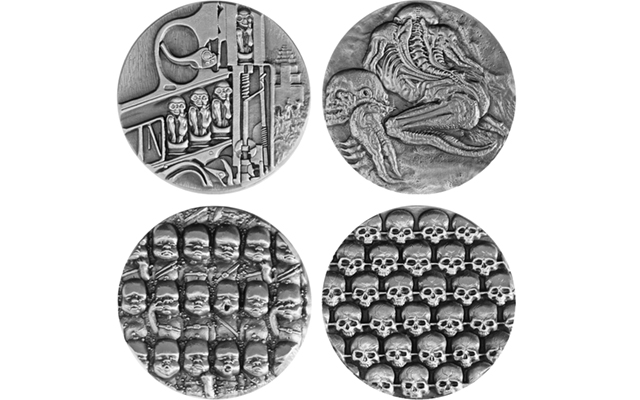 A new medal set from the Helvetic Mint and created by noted Swiss surrealist H.R. Giger features designs alluding to the plagues of the Four Horsemen of the Apocalypse. 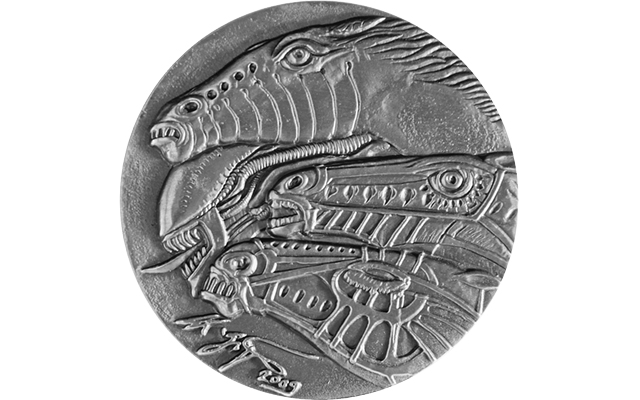 The common obverse of all four silver-plated copper medals in the set shows the heads of four horses, representing the biblical harbingers of the End Times.

Giger, who designed the creature in Ridley Scott’s sci-fi horror classic Alien, died May 12, 2014, at the age of 74, but not before completing designs for four medals being struck and sold by the Helvetic Mint.

“My paintings seem to make the strongest impression on people who are, well, who are crazy,” Giger said in a 1979 interview. “If they like my work they are creative ... or they are crazy.”

Giger’s design for Debbie Harry’s solo album, Koo Koo (1981), was included in 1991 on a Rolling Stone magazine list of the top 100 album covers of all time. Giger went on to work as a set designer for Hollywood, contributing to Species, Poltergeist II and most famously Alien, for which he received a 1979 Academy Award for special effects.

The Helvetic Mint commissioned Giger to produce a set of medals for 2014, for the Four Horsemen of the Apocalypse. The medals were released in September.

The common obverse of each medal shows a horse, with a representation of the related theme (Death, War, Pestilence or Famine) on the reverse.

War is represented by a cut-out view of a gun, with bullets in the form of skulls loading into the chamber. Death is depicted by row upon row of skulls, while Pestilence is indicated with rows of sick babies. A heap of bones represents Famine in the gruesome medal set.

The four horsemen are mentioned in the Bible’s last book, Revelation, or Apocalypse, chapter six.

The silver-plated copper art medals measure 50 millimeters in diameter and are about 6 millimeters thick and some 77 to 80 grams each.

A total of 666 sets are being issued, the number recalling the biblical “mark of the beast” or the Antichrist.

The sets have a suggested retail issue price of $666 U.S. but no distributors have been named so far. For more information, visit the Helvetic Mint website.