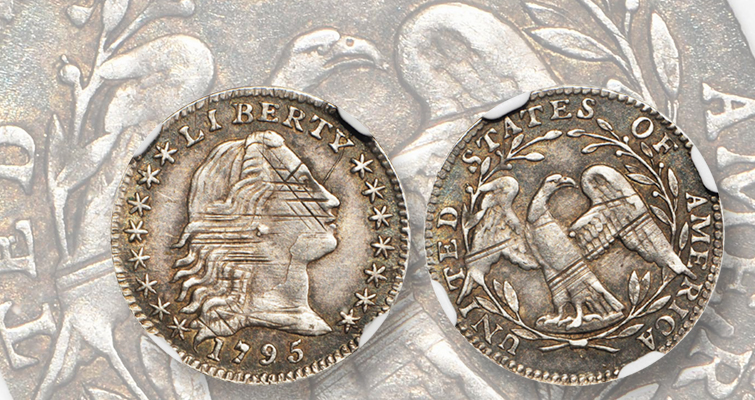 Heavy adjustment marks on the obverse were present on the planchet before the coin was struck, but they have a negative impact on the eye appeal. This AU-50 Flowing Hair half dime sold for $3,360 on June 22. 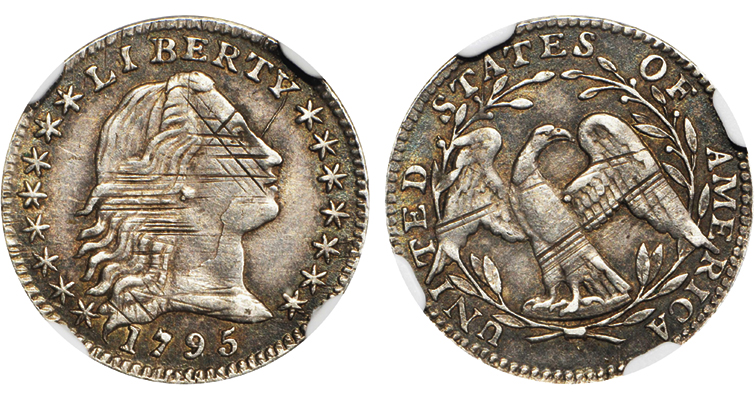 While AU-50 representatives of the scarce two-year type without such extensive adjustment marks can sell at the $5,000 to $7,000 level, this heavily marked but character-filled example with strong, nearly full details and pleasing color sold for $3,360 in one of Stack's Bowers Galleries’ June Baltimore auctions.

Early American coins often have “problems,” but many collectors find that these just add to a piece's charm.

Post-minting problems like corrosion can be flagged and described in the grade, as Numismatic Guaranty Corp. and Professional Coin Grading Service utilize Details grading where the sharpness is assessed and noted and a problem is identified.

You can read about such coins here and here.

Other appearance issues, like adjustment marks that were present on a planchet before a coin was struck, are considered acceptable as part of the minting process and are not described in a coin's grade. Particularly heavy adjustment marks, however, can prompt the market to treat them as a problem, as this coin demonstrates.

Adjustment marks can be very confusing to collectors, since they are Mint-made but often resemble post-minting scratches. This 1795 Flowing Hair half dime is graded About Uncirculated 50 by NGC. without any qualifiers, but heavy adjustment marks are seen in various directions across the obverse.

Planchets were sometimes filed to reduce their weight and while these marks often don’t impact the grade — which is based on wear — heavy adjustment marks can diminish a coin’s market value.

This one sold for $3,360 at the June Baltimore auctions, while AU-50 representatives of the scarce two-year type without such extensive adjustment marks can sell at the $5,000 to $7,000 level. The subject coin offered strong, nearly full details and pleasing color. A die crack from the Y of LIBERTY across Liberty’s face is clear, providing further character to this little early silver issue.