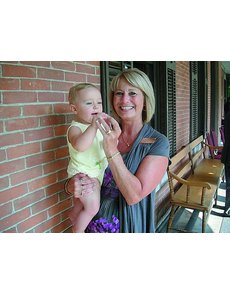 Among recipients of the coin were Kathy Boukissen of Fremont, director of development at the Hayes Center, and her granddaughter, Kendall LeVeune, 10 months. 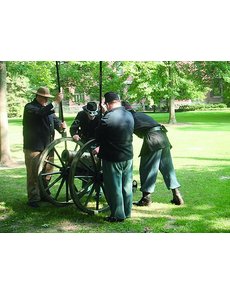 Civil War re-enactors from the Fremont area fired their cannon three times at the end of the ceremony. The cannon is a replica of one used primarily in mountainous areas of Virginia and the Carolinas. Hayes was a veteran of the war, and although he was elected to Congress in 1864, he did not serve in Congress until the war was over. 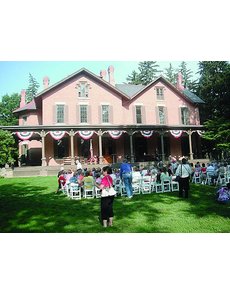 The new dollar coin was unveiled at the Rutherford B. Hayes Presidential Center in Fremont, Ohio. Hayes and his family moved to this brick home, built by his uncle, after he left the White House in 1881. 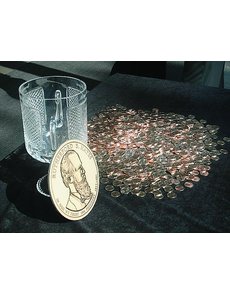 Officials dumped the new coins from a glass bowl onto a table at the end of the ceremonies. 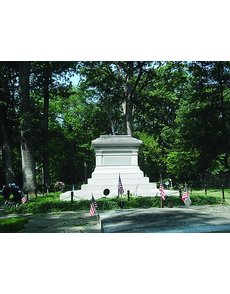 The graves of Rutherford B. Hayes and his wife, Lucy Webb Hayes, sit peacefully on the 23-acre Rutherford B. Hayes Presidential Center grounds. It’s a popular walking site for residents of Fremont. Some 150 people gathered for the coin ceremony Aug. 17. 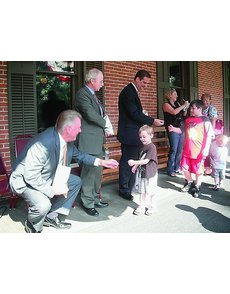 At the end of the ceremony, children were invited up onto the veranda of the Hayes home to receive a new quarter. From left, officials passing out coins included Fremont Mayor Terry Overmyer, Hayes Presidential Center Executive Director Thomas J. Culbertson, and J. Mark Landry, plant manager of the U.S. Mint in Philadelphia.

If former President Rutherford B. Hayes were alive today, he might’ve been impressed. Or proud. Or maybe a bit embarrassed.

On a warm, sun-dazzled morning Aug. 17, 150 people gathered on the spacious lawn of Hayes’ historic brick mansion in Fremont, Ohio, to inaugurate a new Presidential dollar coin that features Hayes’ face on one side and the Statue of Liberty on the other.

Sitting on white chairs on the spacious lawn of the Rutherford B. Hayes Presidential Center, the crowd watched the ceremonies on the home’s long, graceful veranda. After the speeches and three blasts of a Civil War cannon, children and teens were invited up onto the veranda to receive one of the shining dollar coins. Adults could get theirs in exchange for cash at a nearby tent.

A few minutes earlier, Thomas J. Culbertson, executive director of the center, had told the crowd that he was “thrilled that the U.S. Mint selected the Hayes site for the formal introduction of the coin.”

He added, smiling, “We have the best weather because I foolishly rented a large tent,” referring to a white party tent erected behind the Hayes house, just in case.

“This coin connects us to a wellspring of our nation’s greatness,” Landry said. “Rutherford B. Hayes retired here. He helped veterans, prisoners and promoted universal rights. These coins connect Americans to their government.”

Also on the porch were state and congressional officials, Fremont Mayor Terry Overmyer, and George Kane, an official with the Ohio Historical Society. OHS owns the museum and its artifacts; the house is owned by the Hayes Presidential Center Inc. It’s the last presidential home to be owned by an entity other than the federal government, and it was the last to be restored without a cent of tax money.

“And this is the only presidential museum not built with tax dollars,” Culbertson said proudly. Hayes, a principled, modest man, would have appreciated that.

Born in Delaware, Ohio, in 1822, he graduated first in his class at Kenyon College in Gambier, Ohio. A proud Ohioan, Hayes left the state only to attend Harvard Law School for two years. He returned to Lower Sandusky — Fremont’s name back then — but moved to Cincinnati four years later to practice law.

When Hayes was 37, the Civil War erupted. He was too old for the draft, so he volunteered, rising to the position of Brevet Major General in the 23rd Regiment, Ohio Volunteer Infantry.

“He was a principled man,” Culbertson said, “a man who felt that it would be more honorable to die for a cause he believed in” than not to fight at all.

Hayes was wounded five times. Four horses were shot out from under him. He fought in Kentucky, Tennessee, West Virginia, Antietam (in Maryland) and as far south as Pearisburg, Va.

In 1864, “without a campaign,” Hayes was selected to serve in Congress by a Congress commission, but he refused to leave the Union army. He did, however, cast a vote for the Civil Rights (14th) Amendment.

After the war, he served in Congress, returning to Ohio in 1867, when he was elected governor. Hayes favored better schools and aid for military veterans and the mentally ill. He helped create Ohio State University. He made sure Ohio ratified the 15th Amendment, which gave freed black men the right to vote.

In 1876, Hayes was elected U.S. president. His main goal was to re-establish the credibility of the federal government after the scandal-plagued administrations of Andrew Johnson and Ulysses S. Grant, Culbertson said.

His wife, Lucy Webb Hayes, was a college graduate, the mother of eight and the first president’s wife to be nicknamed “the First Lady.” The first telephone and typewriter in the White House were installed during the Hayes administration.

Hayes chose to serve just one term in the White House, something he advocated for all presidents. Then he and Lucy returned to Fremont and the home that had been built by Sardis Birchard, Hayes’ uncle and legal guardian, between 1859 and 1863. Originally it had eight rooms, but Hayes and his wife added two more wings to accommodate their visiting friends and their growing flock of grandchildren.

Hayes became an “active citizen” in Fremont, Culbertson said, serving on a Bible association, the public library board and the cemetery association, among others. He took minutes at some of the meetings. He campaigned for prison reform and equal rights for former slaves.

“His post-presidential service was rivaled only by John Adams and Jimmy Carter,” Culbertson said.

Lucy Webb Hayes died in 1889. Hayes died four years later. They are buried in a quiet corner of the estate, off a shady path that winds around the 23 acres.

In honor of Hayes’ Civil War service, the ceremony ended with three bursts from a cannon, fired by a local Civil War reenactment group. Bob Kelley of Woodville, Ohio, is the captain. The cannon is a reproduction, produced from a mold that made cannons for the Civil War.

“It’s a South Carolina piece,” said Howard Justice of South Amherst, Ohio, a sergeant major in the company. “It could be broken down and carried by several mules. It was used in mountainous areas, mostly Virginia and the Carolinas.”

The Hayes center attracts 40,000 visitors a year. Five generations of the Hayes family lived in the home for a century, from 1863 through the mid-1960s. Hayes even had a private bathroom — and he took two pictures to prove it. ¦