The Joys of Collecting: New reference in the works 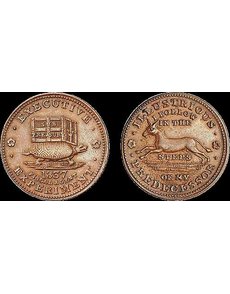 In 1955, when I was gaining experience as a coin dealer, one of my main suppliers was William L. Pukall, an old-time dealer who conducted a mail-order business in Union City, N.J. From him I bought many hundreds of Proof Indian cents from the 1880s onward and hundreds of Matte Proof Lincoln cents 1909 to 1916, still in their original Mint-issue thin tissue paper. Every one of them was toned a rich brown color with hints of blue. He had been dealing since the 1910s and now was in the sunset of his career.

We talked on the phone one day, and he asked me if I would like to buy some Hard Times tokens. I had read through Lyman H. Low’s 1900 book, Hard Times Tokens, but had never owned any. He sent me a selection of a couple dozen different, mostly priced at just a few dollars each. I was bitten by the bug, and ever since then I have enjoyed studying them. Today I have a modest collection of varieties that I find to be interesting. Unlike the “completion” goal in the American federal series, no collection of early tokens has ever had everything.

Low defined the Hard Times era as 1832 to 1844. In reality, the economic hard times began in the spring of 1837 and ended in the spring of 1843. However, Low wanted to include the tokens issued for President Andrew Jackson’s second campaign in 1832, the “glorious Whig victory” of 1834, and other events memorialized on such pieces. Today, several hundred different varieties are cataloged within the series. Each token has a story to tell.

Such tokens have two main themes: political subjects, in particular the controversial Andrew Jackson and his successor Martin Van Buren, and advertisements of merchants. Democrats Jackson and Van Buren were satirized unmercifully. Jackson vetoed the charter renewal of the Bank of the United States, set to expire in 1836. Federal funds were moved to state banks, and then, too slowly as the illustrated token shows, to sub-treasuries. Van Buren said, “I follow in the steps of my illustrious predecessor,” this being Jackson, depicted as a jackass.

For Whitman Publishing LLC, I am in the midst of creating A Guide Book of Hard Times Tokens: Political Tokens and Store Cards 1832-1844. I am tapping other talent in the series — such as Robert Schuman, Steve Hayden and others who enjoy research. I will be working on this on and off during the next year. If you have any unpublished advertisements or other items to share, contact me. In the meantime, enjoy the holidays.